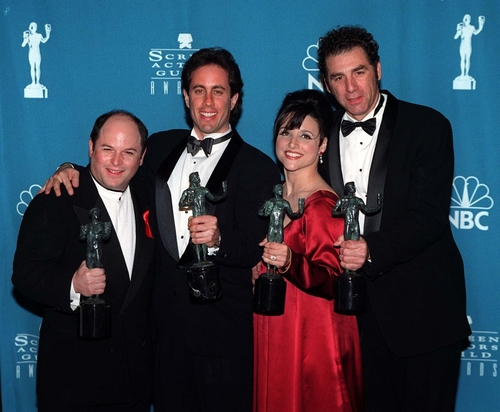 The cast of ‘Seinfeld’ is seen in this 1997 photo. From left, Jason Alexander, Jerry Seinfeld, Julia Louis-Dreyfus and Michael Richards. (Featureflash Photo Agency/Shutterstock.com)

A North Dakota judge has denied a prosecution request for a new judge in a murder conspiracy trial in an opinion that took the lawyers to task for their heated arguments.

Judge Thomas Merrick lamented a lack of civility and cited a lesson from Seinfeld in his opinion, the Minot Daily News reports. A story was also published in the Bismarck Tribune.

“There was a time, and not too long ago, when lawyers in North Dakota were collegial to one another and respectful towards the bench,” Merrick wrote.

“Perhaps that was because they knew, as the ‘Seinfeld’ characters discovered, that a $20 bill lost may soon be counterbalanced by a $20 bill found. Perhaps they realized that while their present client is holding aces, their next might not. In the small universe of the courthouse, civility and doing the right thing was once as important as winning. No more. Now, any adverse ruling is taken as an affront.”

Prosecutors had asked Merrick to oust Judge Stacy Louser from presiding in the trial of former schoolteacher Cynthia Wilder, accused of helping her husband plan the murder of his first wife.

In a July 5 hearing, Ward County Deputy State’s Attorney Kelly Dillon asserted a general concern over Louser’s ability to control a courtroom and said her office had disagreed with Louser’s rulings in previous cases. Defense lawyer Patrick Waters countered that the prosecution was “judge shopping” and said the state was “throwing a tantrum” because it didn’t like Louser’s past rulings.

Merrick agreed with the judge-shopping argument. “I can only conclude that they are not seeking impartiality but favor,” he wrote.

Merrick said he doubted that any other judge would do a better job controlling a courtroom “if lawyers continue choosing unrelenting argument over zealous advocacy.”