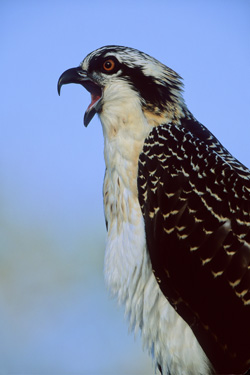 Transportation officials in Maryland are racing against the clock and Mother Nature as they struggle to remove an osprey nest that has repeatedly been constructed on an elevated platform directly in front of a traffic camera.

The bird is a federally protected species, but state officials were told by the U.S. Fish & Wildlife Service they could remove the nest as long as the osprey hasn’t yet laid any eggs in it, the Baltimore Sun reports.

Each time the nest has been removed, however, the bird has rebuilt it, likely assisted by its mate. The nest is located on the eastbound U.S. 50 approach to the Chesapeake Bay Bridge, and transportation officials say the traffic camera it blocks is needed to monitor the flow of vehicles for safety reasons.

Craig Koppie, who works as a federal wildlife biologist, inspected the nest area on Tuesday and offered transportation workers a potential solution.

If they put up a new platform near the traffic camera and bait it with some of the material from a previously deconstructed nest that was dropped on the ground below, chances are the bird, or birds, will happily relocate, he explained to the newspaper. Put “a handful of sticks … that were dropped underneath” on a nearby platform, he predicts, and the birds “will go to it quite quickly.”