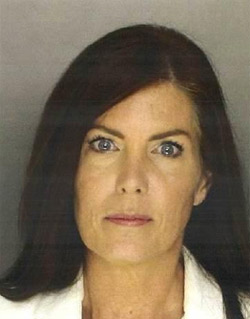 Photo of Kathleen Kane from the Montgomery County District Attorney.

Former Pennsylvania Attorney General Kathleen Kane was sentenced to 10 to 23 months in jail on Monday for lying about her leak of grand jury documents.

Kane had faced a maximum sentence of 12 to 24 years in prison after her conviction in August on charges that included perjury and obstruction of justice. Kane had sought probation and house arrest, citing the impact of a jail sentence on her sons, ages 14 and 15.

Prosecutors had argued Kane leaked the grand jury material to embarrass a political rival, and lied about it under oath.

Kane apologized for the consequences of her actions but not her crimes, according to the coverage by Philly.com. She had alleged the charges were fallout from her office’s “Porngate” probe of sexually explicit, racist and sexist emails sent on state computers.