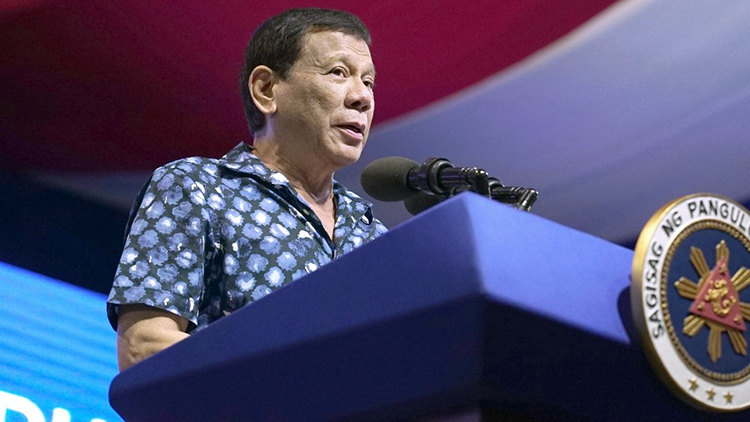 Philippines President Rodrigo Duterte. In an August 2017 speech, Duterte told police not to be intimidated by rights lawyers. Republic of the Philippines.

A Philippines lawyer whose clients were targeted in President Rodrigo Duterte’s drug war was killed Tuesday. Police say gunmen on motorcycles shot Benjamin Ramos as he left his office.

Ramos is the 34th lawyer killed since Duterte took office two years ago, report the New York Times, Al Jazeera and the Manila Bulletin. Three of 34 lawyers slain were judges and seven were prosecutors.

Ramos was a founder of the National Union of People’s Lawyers, which provided pro bono representation to people whose families were targeted in the drug war.

The group says he had been part of a quick reaction team that investigated the massacre of nine workers at a sugar plantation last month. He also represented six youth activists arrested after an encounter with state security forces.

In an August 2017 speech, Duterte told police not to be intimidated by rights lawyers investigating deaths of drug dealers and addicts, according to the New York Times. “If they are obstructing justice,” Duterte said of the lawyers, “you shoot them.”

The president of NUPL, Edre Olalia, says police had “maliciously and irresponsibly tagged” Ramos in a post as someone associated with an armed communist movement. Olalia says the group is “disturbed and unbowed” by the slaying.

Previous:
Impertinent or descriptive? Judge refuses to strike these phrases from driver's suit against officer

Next:
ABA president opposes proposed rule that would reduce rights of immigrant minors