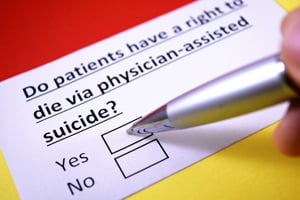 New York’s top court ruled on Thursday that there is no state constitutional right to physician-assisted suicide.

The New York Court of Appeals rejected arguments that assisted-suicide laws, as applied to patients seeking aid in dying, violate their rights to equal protection and due process. The New York Law Journal (sub. req.), the Buffalo News and the Albany Times-Union have stories.

Among those who filed the suit were three terminally ill patients, two of whom have since died. The third plaintiff’s cancer is in remission. Other plaintiffs included medical providers who feared prosecution and End of Life Choices, an advocacy group.

Their suit had asserted the state’s equal protection clause was violated because the assisted-suicide law discriminates between those who can choose to die by declining life-sustaining assistance and those who cannot. The appeals court rejected the argument because the law allows everyone to refuse unwanted medical treatment and allows no one to assist a suicide.

The suit also claimed the plaintiffs’ due process rights were violated because their fundamental right to self-determination includes the right to choose aid in dying. The appeals court disagreed. “Contrary to plaintiffs’ claim,” the court said, “we have never defined one’s right to choose among medical treatments, or to refuse life-saving medical treatments, to include any broader ‘right to die.’”

The court said the right to die is not fundamental, and the assisted suicide laws need only be rationally related to a legitimate government interest.

“The state pursues a legitimate purpose in guarding against the risks of mistake and abuse,” the court said. “The state may rationally seek to prevent the distribution of prescriptions for lethal dosages of drugs that could, upon fulfillment, be deliberately or accidentally misused. The state also has a significant interest in preserving life and preventing suicide, a serious public health problem.”