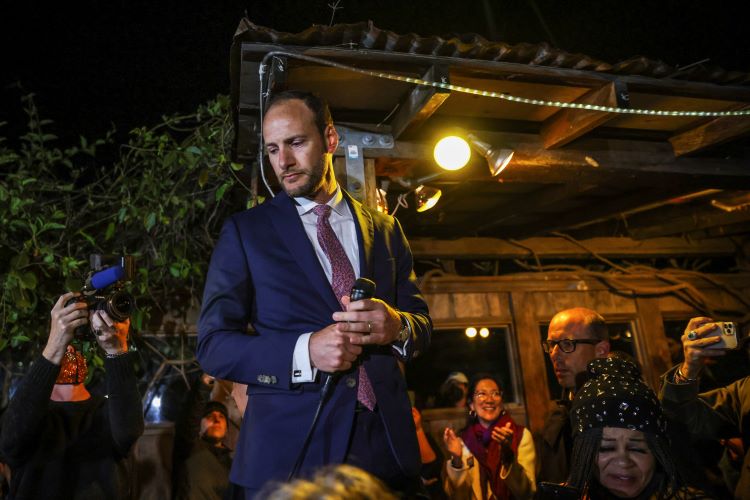 Chesa Boudin prepares to concede at his recall party June 7 in San Francisco. He was ousted as the district attorney. Photo by Gabrielle Lurie/The San Francisco Chronicle via the Associated Press.

Early results showed that 60% of the voters supported the recall, report the San Francisco Examiner and the New York Times. He had been elected in 2019 with close to 51% of the vote.

Boudin is a Democrat who was a former deputy public defender. He expanded diversion programs, ended cash bail, prosecuted police misconduct and eliminated gang enhancements in sentencing, according to the New York Times and an op-ed in the Washington Post.

Boudin’s views on incarceration were shaped by the imprisonment of his parents, Weather Underground activists, for driving a getaway car in an armed robbery that resulted in three deaths.

The New York Times saw the election as a contest between progressive Democrats who supported Boudin as a leader in the effort to reduce mass incarceration and others “who grew agitated by persistent property crimes and open drug use during the pandemic.”

But the Washington Post op-ed said San Francisco’s crime figures weren’t out of the ordinary, and the recall effort was motivated by high-profile crimes, such as a fatal hit-and-run by a man on parole for armed robbery.

“Like in many cities during the pandemic, San Francisco saw burglaries and car thefts spike (though some crimes have since abated),” the article said. “Homeless encampments and drug use increased in visibility as the downtown emptied, and residents became desperate to hold someone accountable.”

Boudin offered his assessment of why he lost, according to the San Francisco Examiner.

“The right-wing billionaires outspent us three to one. They exploited an environment in which people are appropriately upset and they created an electoral dynamic where we were literally shadowboxing,” Boudin said. “Voters were not asked to choose between criminal justice reform and something else. They were given the opportunity to voice their frustration and their outrage, and they took that opportunity.”