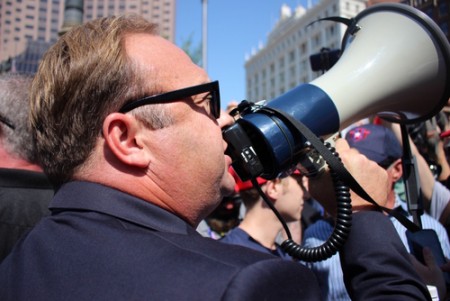 In a child custody case in Austin, Texas family court, lawyers for conservative radio host Alex Jones and his ex-wife, Kelly Jones, are arguing over whether his radio persona is who he really is, the Austin American-Statesman reported Sunday.

Alex Jones is best known as the radio personality behind The Alex Jones Show and Infowars, a YouTube channel where he makes assertions like the Sandy Hook massacre was a hoax and that the federal government faked Sept. 11. Jones has received national attention in recent months because President Donald Trump is a fan of Infowars; Jones has said he’s in regular contact with the president.

Alex Jones and Kelly Jones were divorced in 2015, and their children, now ages 9, 12, and 14, have been living with Alex Jones ever since, and Kelly Jones has only limited visitation. She would like joint or sole custody, and she’s arguing in court that Alex Jones is not a safe parent because his angry public persona is who he really is.

“He’s not a stable person,” Kelly Jones reportedly testified at a pretrial hearing. “He says he wants to break Alec Baldwin’s neck. He wants J-Lo to get raped … He broadcasts from home. The children are there, watching him broadcast.”

The Daily Beast reported Tuesday that Alex Jones appeared to contradict that on his show, saying: “They’ve got articles out today that I say I’m a fake, all of this other crap. Total bull! … I 110 percent believe what I stand for.”

It could be difficult for Alex Jones to balance his need to convince the court his work is political satire with his need for his audience to believe he means it, the Statesman observed Tuesday in its coverage of the trial. Alex Jones’s politics also made it slightly harder to seat a jury, the Statesman reported Monday.

At the pretrial hearing, District Judge Orlinda Naranjo told the counsel for both sides—eight lawyers in all—that “this case is not about Infowars, and I don’t want it to be about Infowars.”

But attorneys for Kelly Jones have submitted multiple Infowars videos that they’d like to show the jury as evidence. In one that Naranjo agreed could be used, the couple’s son was brought into the studio to play some videos he’d helped make for Infowars. The judge rejected another in which Alex Jones threatened congressman Adam Schiff, a California Democrat who has suggested that Alex Jones might be involved with Russian attempts to influence the 2016 election.

The former couple, who had a high net worth on their divorce, has also tangled over money. Kelly Jones’s attorneys say she is practically bankrupt, despite $43,000 a month in payments from Alex Jones, because of extensive divorce litigation. They allege that Alex Jones would like to drag out the custody case and a related lawsuit further to exacerbate that problem, and filed an unsuccessful motion to have Alex Jones pay her legal bills on an interim basis.