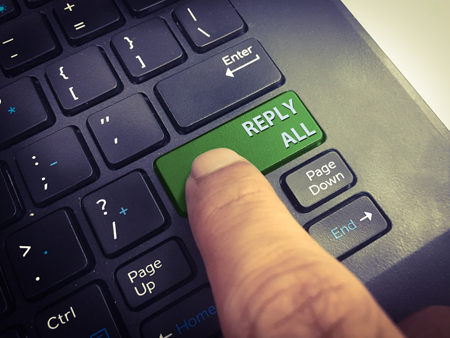 Circuit Judge A. Raymond Randolph acknowledges he inadvertently hit “reply all” when he scolded a lower court colleague for forwarding information about a climate change seminar.

The event was co-sponsored by the Federal Judicial Center and it was intended to provide judges with a basic familiarity about climate change concepts. U.S. District Judge Emmet Sullivan of Washington, D.C., forwarded the seminar announcement to 45 judges and their staff members on July 3.

Randolph, a judge on the U.S. Court of Appeals for Washington, D.C., directed his ire at Sullivan in his reply-all email. The Washington Post obtained copies of the email chain and spoke with Randolph about the ensuing controversy.

“What is your purpose in subjecting our colleagues to this nonsense?” Randolph sniffed. “The jurisdiction assigned to you does not include saving the planet.”

Randolph continued, perhaps leaving out the word “less” before “hubris” in the first sentence:

“A little hubris would be welcomed in many of your latest public displays. The supposedly science and stuff you are now sponsoring is nothing of the sort. Get out of this business and back into the business of judging, which [is] what you [are] being paid to do. As a former chairman of the federal judiciary’s ethics committee I think you have crossed the line. Should I report you? I don’t know. But in the meantime please delete me from your email list.”

Now Sullivan believes it is Randolph’s behavior that should be examined. He is seeking an advisory opinion from the U.S. Judicial Conference’s Committee on Codes of Conduct that addresses whether Randolph needs to recuse himself in appeals of Sullivan’s orders and whether his comments on climate science show his impartiality is impaired.

Randolph tells the Washington Post that his email and the strong language it contained were a mistake. He said he has no ill will toward Sullivan.

The Post notes that Randolph had been assigned to hear oral arguments in a case challenging an Environmental Protection Agency decision to abandon some vehicle emissions standards. His name was removed from the appeal when the court calendar was updated on Tuesday.