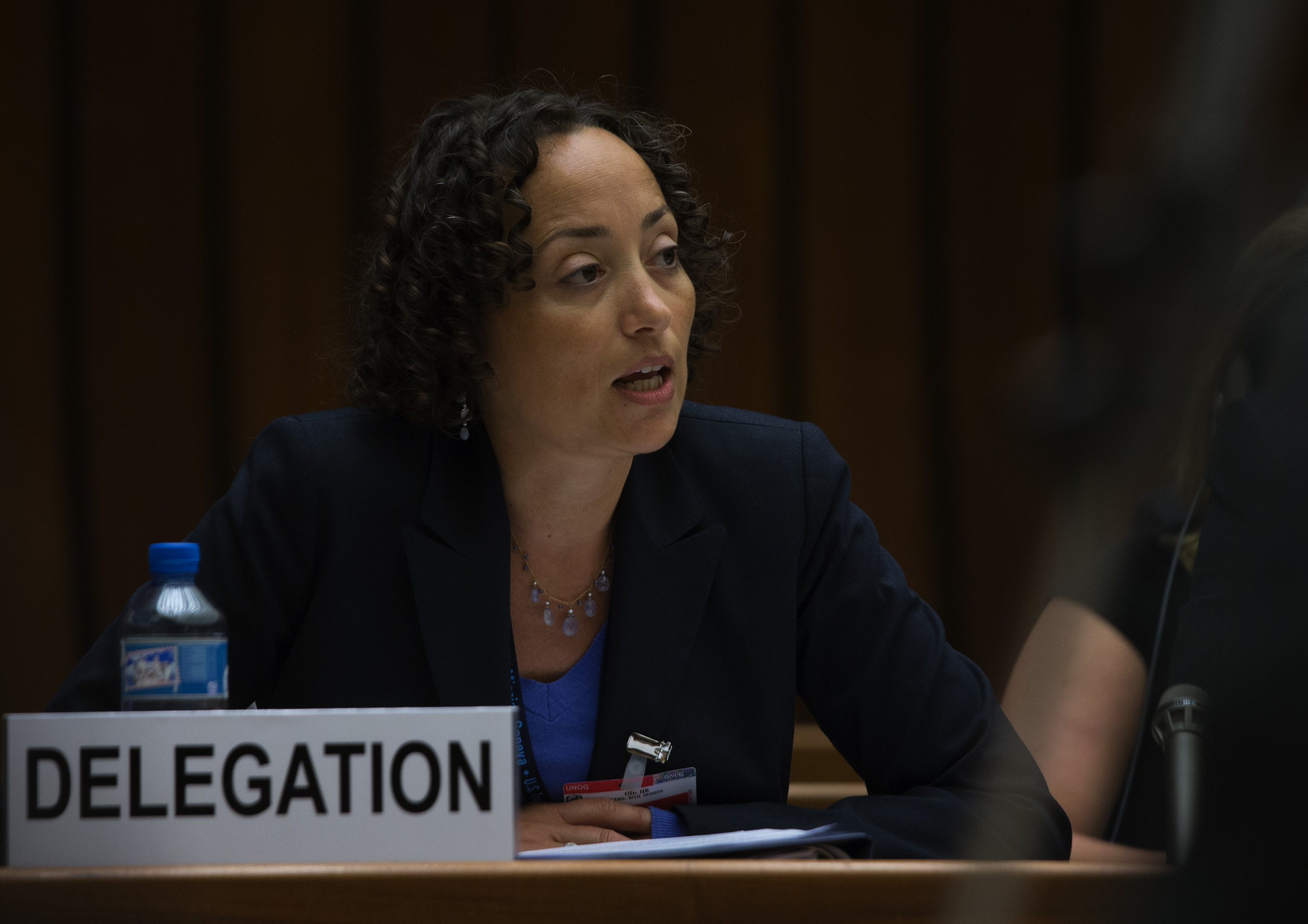 Catherine E. Lhamon: “We live in deeply dangerous times, and we have had an insufficient government response to that danger.” Photo by U.S. Mission Geneva / Eric Bridiers / flickr

A report made public Wednesday by the U.S. Commission on Civil Rights called on Congress to adopt legislation that would use funding to incentivize police departments across the country to produce annual accountings of hate crimes. The commission also recommended that the police departments establish dedicated hate crime units aimed at better identifying and investigating reports of those incidents.

The commission issued its proposals a day after the latest FBI report on hate crimes, an accounting the commission said remained deeply flawed. The FBI’s report, the commission noted, still depends on the voluntary submission of data from local police agencies, a process that has regularly produced what almost everyone agrees is a vast undercount of actual hate crimes.

“We live in deeply dangerous times, and we have had an insufficient government response to that danger,” said Catherine E. Lhamon, chair of the U.S. Commission on Civil Rights.

The FBI report issued Tuesday showed that slightly fewer police agencies than last year responded to the request for hate crime data, and that of the departments that did respond, just 13% reported one or more hate crimes in 2018. Alabama and Wyoming submitted zero hate crimes last year.

“The need for improved data collection and reporting is astonishing, and the absence of effective data hamstrings any effective response that we as a nation might have,” Lhamon said.

ProPublica requested comment from the FBI and the Department of Justice, and will post their responses as soon as they are received.

The commission’s recommendation to pass legislation incentivizing police to report hate crimes resembles part of the No Hate Act bill currently under consideration in Congress, though the report does not mention specific legislative proposals. Lhamon said the recommendation isn’t tied to particular legislation.

Examining the challenges faced by local police in investigating hate crimes, the commission addressed the widespread lack of training for officers in how to identify, investigate and prevent such crimes. Creating bias crime units would allow police to “gain a better understanding about hate crimes that are occurring in their cities and to increase the likelihood of accurate classification,” the report said. The commission said the DOJ ought to provide grants for cultural competency training and take the lead in detailing how many hate crimes are successfully prosecuted nationally.

The FBI report showed the highest levels of violent hate crimes since 2001, according to the Arab American Institute. The Anti-Defamation League said the number of hate crime murders in 2018 was the highest since the bureau began tracking them in 1991. Eleven of those killed were the victims of a mass shooting at a Pittsburgh synagogue.

The FBI data showed a 14% rise in anti-Latino hate crimes, the third year of increases of these types of offenses. This trend preceded the August 2019 shooting in El Paso, Texas, that left 22 people dead, one of the deadliest attacks on Latinos in modern U.S. history. The U.S. Commission on Civil Rights report cites the Bureau of Justice Statistics 2011-15 survey of bias crime victims, which shows Latinos experience a higher rate of violent hate crime victimization than white or black victims, but some are less likely to report incidents to the police because of fears about immigration status. The report recommends improvements to community policing and outreach, which could potentially encourage more victims to report.

The chair of the commission said that in the absence of effective tracking of hate crimes by the government, the public had been forced to rely on journalists for a fuller appreciation of the number and kinds of crimes taking place in the country. The report specifically credits ProPublica’s hate crime reporting, as well as stories from partners such as Education Week and The Baltimore Sun, which published investigations as part of the Documenting Hate project.

Brian Levin, a former NYPD officer and the director of the Center for the Study of Hate and Extremism at California State University, San Bernardino, told ProPublica that better incentives for agencies to report to the FBI are key. Making training and policy standards contingent on funding could help, he said, as could expanding resources and personnel.

The commission’s report also urges more transparency on hate crime statistics and prosecutions, which it said could help improve accountability. It recommends that Congress fund a federal repository run by the DOJ containing hate crimes and bias incident resources, which would include information on hate crime prosecutions and convictions and court records. Currently, only press releases on individual federal hate crime cases are available on the DOJ site.

Finally, the U.S. Commission on Civil Rights makes a number of suggestions to state and local police, including investigating and tracking hate incidents that may not rise to the level of crimes, making hate crime data public and easy to access, and establishing dedicated bias crime units.

Michael Lieberman, the Anti-Defamation League’s Washington counsel, said that tracking noncriminal hate incidents is a best practice for police in terms of building trust. Cities like Seattle and Arlington, Texas, have adopted this approach. “It’s not punishing speech,” Lieberman said, “but it is demonstrating communities can feel threatened even when it’s not a crime.”