Sex traffickers use social media to research victims to groom 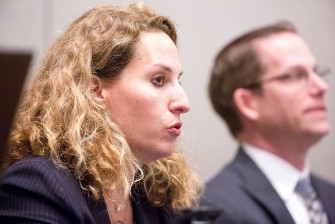 Images of prostitutes walking the streets and picking up johns are pervasive in popular culture. But the reality is that commercial sex is just a click away.

These days, johns set up “dates” from the privacy and comfort of their homes. So do the pimps and predators who lure vulnerable youths into the sex trade.

These predators can fix on a potential victim, then do their research online, mining social media accounts for information that can help them exploit victims, said Jeffrey Veltri, an FBI agent and lawyer who works to recover and rescue victims of human trafficking.

Veltri and Assistant U.S. Attorney Alessandra Serano, who is the Project Safe Childhood coordinator for the Southern District of California, spoke about their experiences working with trafficked children at an ABA Midyear Meeting program, “The Gateway to Vulnerability: Youth Internet Use and Human Trafficking.” The program, sponsored by the Young Lawyers Division, explored where the victims come from (everywhere) and who the perpetrators can be (anyone).

Often, the perpetrators come from organized gangs—and social media is a powerful recruiting tool at their disposal.

Much like law enforcement uses social media to gather information about targets, Veltri said, gang members and predators use it to find vulnerable teens, mostly girls they can groom for the sex trade. That’s why it’s so important for parents and caregivers to be fully aware of who their children are talking to online, he said, and the broader community should be more aware of sex trafficking, as well.

“We’re never going to arrest and prosecute our way out of this problem,” Veltri said. “This is … everyone’s problem. We need to care more about our society.”

Who are the victims Veltri and Serano see on a regular basis?

“The victims are anybody who is willing to hook up with someone who says to them, ‘You are beautiful. I love you,’ ” Serano said. These girls—often runaways or foster children—don’t have strong support systems at home. And they’re led to believe the sex trade will empower them to be in control of their bodies and destinies, she said, but it’s their handlers who keep the money and maintain control through threats and coercion.

Yet when the FBI shows up after a sting and is prepared to rescue trafficked victims, agents are met with hostility. Both Serano and Veltri said they’ve never encountered a victim eager to be rescued. Rather, these victims are hostile and unwilling to accept help. 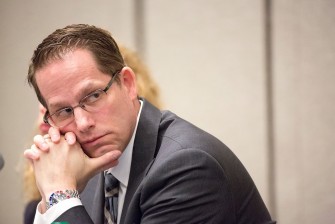 Jeffrey Veltri of the FBI. Photo by Earnie Grafton.

The road to recovery for victimized girls is long and hard, often involving lapses into drug use and more running away. Only after much time and effort do a fraction of victims find their way out.

That’s why it’s sometimes useful to be able to work with local law enforcement to arrest trafficking victims so they can “cool their heels” and be more open to support and recovery services, Veltri said.

The issue of incarcerating trafficking victims led to a discussion of the validity of safe-harbor laws that decriminalize prostitution for such victims. Veltri said safe harbors sometimes inadvertently tie the hands of members of law enforcement who want to help victims but don’t have the ability to keep them long enough to introduce them to social services and support networks.

Jamie Quient, a litigation associate at Procopio, Cory, Hargreaves & Savitch who moderated the program, told the audience that her mind isn’t made up yet about safe-harbor laws. She said some sort of safe-harbor law in combination with a protective custody option may be a better approach—a middle ground where victims aren’t treated like criminals and at the same time are removed from the clutches of traffickers and given a chance to build better lives.