Should students call law professors by their first names? 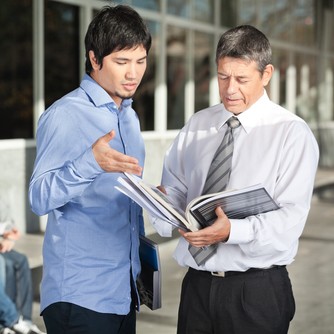 It may seem odd—and perhaps uncomfortable—for an associate to use Mr. or Ms. when speaking with a partner. But few lawyers refer to judges by their first names, even if they’re friends. For law professors, the question of what students should call them can be a bit ambiguous.

Shima Baradaran Baughman, a University of Utah College of Law professor, signs all her emails as “Prof B,” although many students call her Shima, she writes at PrawfsBlawg. Some law professors prefer to be called by their first names, she acknowledges, because it could make nervous students more comfortable, and it’s an equality issue. However, Baughman says the practice may encourage a familiarity that’s getting out of hand.

Some of Baughman’s students come to class late, wear pajamas and bring snacks, she writes. They’ve also asked her to Skype study groups and review outlines for mistakes.

“These are requests I would never have made in law school even if I was paid a large amount of money,” writes Baughman, a 2004 graduate of Brigham Young University Law School. “I worry that students have an extremely casual view of their professors, and calling them by their first names may be exacerbating what I think is an already bigger issue of casual millennials and respect.”

If a law professor likes to be called by her first name, she needs to make clear to students that others may not, the criminal law professor writes.

If you have a class with University of California, Los Angeles law school professor Eugene Volokh, feel free to call him by his first name. Law school prepares law students to be professionals, and lawyers almost always call each other their first names, particularly if they have a history, he writes at the Volokh Conspiracy, published by the Washington Post.

“I call students by their first names and have in the past told students that they could call me ‘Eugene.’ (I think I might not have expressly said that the last few years, but I think I ought to resume that). Even when I say this, most of them call me ‘Professor Volokh,’ and I’m fine either with that or ‘Eugene,’ ” he writes.

At Los Angeles law firms, junior associates call senior partners by his or her first name, according to Volokh, and he expects that the same is true in New York.

The first name rule is different for judges, according to both professors. Volokh clerked for 9th U.S. Circuit Court of Appeals Judge Alex Kozinski, and the two have been friends for 20 years, but he never calls the jurist by his first name. The rule may be different when judges address each other outside of court.

“My sense is that judges always call each other by their first names among themselves, except perhaps when they first meet,” Volokh told the ABA Journal.

Some students aren’t familiar with how lawyers traditionally address judges, according to Baughman, and refer to a jurist by his or her first name during clerkships.

“I actually think the legal profession is one of the few remaining professions where there is a sense of formality in our practice of law,” Baughman writes. “We have to address judges by a certain title (or they will correct you at oral argument), we have to carefully include exact language, color and formatting on briefs or they are rejected, addressing of opposing counsel and often clients often has to do this by their full name and title.”