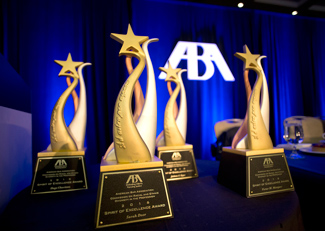 The statuettes for the four 2016 Spirit of Excellence Award recipients. Photos by Earnie Grafton.

Despite concerted efforts to make the legal profession more diverse and inclusive, progress toward achieving that goal still can be frustratingly slow. But for two decades, the ABA has held an event at its midyear meetings that gives a jolt of inspiration to help energize efforts to achieve equality in the profession.

That was the case again on Saturday during the 2016 ABA Midyear Meeting in San Diego, when the 21st annual Spirit of Excellence Awards Luncheon was sponsored by the Commission on Racial and Ethnic Diversity in the Profession. Except for House of Delegates sessions, the luncheon is usually the largest event held during midyear meetings.

The luncheon featured award presentations to four people who epitomize the profession’s efforts to achieve diversity and inclusion. In brief remarks, the recipients recounted their personal stories of triumph over adversity.

Hugo Chaviano, for instance, described the journey that brought him to the United States from Cuba by way of Spain in 1966. He held a variety of jobs while going to high school and then college—including delivering newspapers, working as a short-order cook and gas station attendant, and pressing shirts at a laundry. He said one of his college professors urged him to apply to law school. He earned his law degree at Northwestern University in Chicago a few years later.

And Victor M. Marquez, principal at the Marquez Law Group in Los Angeles, recounted how he overcame the twin negative stereotypes of being Hispanic and gay to graduate from law school and pass the California bar exam on his first try. “I was even the first Hispanic student body president at Venice High School” outside Los Angeles, Marquez said.

Marquez said the late Los Angeles Mayor Thomas Bradley, the grandson of slaves, was his muse if not his mentor in deciding to attend law school. When he met Bradley during an event while he was in high school, Marquez was deeply impressed by the fact that the mayor was a lawyer by training.

Marquez was the first openly gay person to serve as president of the Hispanic National Bar Association, where he pushed for the creation of an LGBT section. Marquez serves on the ABA Commission on Sexual Orientation and Gender Identify, and he credited the ABA for selecting an openly gay person to receive a Spirit of Excellence Award. “You’re expanding the definition of diversity beyond race and ethnicity to encompass the LGBT community,” he said.

Another Spirit of Excellence Awards recipient is Sarah Deer, a citizen of the Muscogee Nation of Oklahoma and a professor at Mitchell Hamline School of Law in St. Paul, Minnesota. She also is an associate justice for the Prairie Island Court of Appeals and an appellate judge for the White Earth Nation. Her teaching and research focus is the intersection of tribal law and victims’ rights, especially violence against women on tribal lands. She is the author of The Beginning and End of Rape: Confronting Sexual Violence in Native America. She was named a MacArthur fellow in 2014.

Deer opened her remarks in Mvskoke, the language of the Muscogee people, which is “in grave danger of extinction,” Deer said. According to Deer, fewer than 5,000 people still speak the language. “I wanted to share my language as part of celebrating the possibility of survival,” she said. “Indeed, my people—the Muscogee people—are resilient and indeed have reached to the stars through difficulty.”

JoAnne A. Epps has served as dean of Temple University Law School in Philadelphia since 2008. Epps has received numerous awards for her work to achieve diversity in the legal profession, including the 2015 M. Ashley Dickerson Award from the National Association of Women Lawyers and the 2014 Justice Sonia Sotomayor Diversity Award from the Philadelphia Bar Association. Last year, Philadelphia’s mayor appointed her to chair a newly created police oversight board. She is a former deputy city attorney in Los Angeles and an assistant U.S. attorney in Philadelphia.

In her remarks, Epps issued an impassioned call for stronger efforts to achieve diversity in the legal profession. In particular, she said, it must be recognized that implicit bias is everywhere in American society. She cited, for instance, the contrasting ways culture portrays the imagery of black and white. Even in the Star Wars films, she said, Luke Skywalker wears white, while the evil Darth Vader is garbed completely in black. “And then there’s my favorite,” she said, “devil’s food cake as opposed to angel food cake. I’m sick and tired, and I’m sick and tired of being sick and tired.”

Citing the motto of the Spirit of Excellence Awards—“To the Stars Through Difficulty”—Epps said, “I believe we can make the stars reachable for everybody, but it will take work, and it will take commitment. I’m in. Will you join me?”