StarKist settlement offers a bonanza for tuna lovers: $25 refund or $50 in tuna 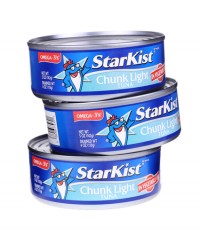 For consumers jaded by seemingly worthless settlements in class-action cases, an agreement between StarKist Co. and a California man offers a bonanza.

Purchasing even a single can of specified StarKist tuna products between Feb. 19, 2009 and Oct. 31, 2014 entitles the consumer to either a $25 cash refund or $50 in tuna, the Cleveland Plain Dealer reports.

And, because consumers may not have kept their receipts for tuna purchases, they are not required to provide proof of purchase, the article notes. However, submitting a claim if the individual did not buy a specified StarKist product could be considered perjury.

While admitting no wrongdoing in the lawsuit brought by California resident Patrick Hendricks over a claimed shortage of actual tuna in 5-ounce cans, StarKist agreed to the settlement “to stay focused on our core mission of providing healthy and delicious seafood to our consumers,” a company spokeswoman said when the settlement was announced in May.

The $12 million settlement fund was to include $8 million earmarked for cash payments and $4 million for tuna, the Pittsburgh Post-Gazette reported at that time.

Hendricks had independent testing done to determine whether the amount of actual tuna in a 5-ounce can, which also contains oil or water, met U.S. government standards. He alleged in the Northern District of California suit that testing showed cans were underfilled.

A settlement website provides more details about claiming a refund.