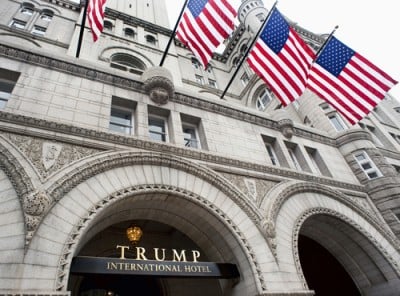 A federal judge in Maryland has ruled that Maryland and Washington, D.C., have standing to pursue a narrowed claim in their lawsuit contending that President Donald Trump is violating the Constitution’s foreign and domestic emoluments clauses by accepting payments from foreign governments and states through his business empire.

U.S. District Judge Peter Messitte ruled on Wednesday that the jurisdictions had standing, and the political question doctrine is not a bar to the court taking action. The Washington Post, the National Law Journal, BuzzFeed News and the New York Times covered the decision.

Messitte limited the suit to a claim that the clauses were violated when the Trump International Hotel in Washington, D.C., accepted business from foreign and state governments.

In December, a federal judge in Manhattan tossed a different emoluments suit brought by Citizens for Responsibility and Ethics in Washington and a restaurant industry group. In that case, U.S. District Judge George Daniels ruled that Congress, not the courts, should decide whether Trump is violating the Constitution by failing to divest his business holdings.

The foreign emoluments clause states that, absent congressional consent, no one holding any office of profit or trust shall “accept of any present, emolument, office or title, of any kind whatever, from any king, prince or foreign state.”

The domestic emoluments clause, also known as the presidential compensation clause, says the president shall receive compensation for his services, “which shall neither be increased nor diminished during the period for which he shall have been elected, and he shall not receive within that period any other emolument from the United States, or any of them.”

According to Messitte, many residents of Maryland and Washington, D.C., are affected when foreign and state governments choose to stay or dine at the Trump hotel in those jurisdictions and they “are, quite plausibly, trying to protect a large segment of their commercial residents and hospitality industry employees from economic harm,” he said.

He also noted that the two jurisdictions have buildings and land interests that directly compete with the hotel.

Messitte said his ruling restricting the suit to claims regarding the Washington, D.C., hotel is limited to the particular plaintiffs and the particular facts of the case.

“This is in no way meant to say that other states or other businesses or individuals immediately affected by the same sort of violations alleged in the case at bar, e.g., a major hotel competitor in Palm Beach (near Mar-a-Lago) or indeed a hotel anywhere in the state of Florida, might not have standing to pursue litigation similar to that which is in process here,” he wrote.