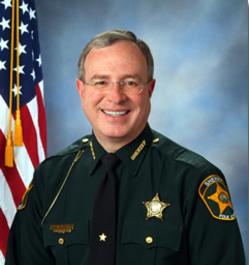 A lawsuit filed electronically on Sunday argues that the sheriff in Polk County, Florida, violated the constitutional rights of a man seeking emergency shelter by requiring him to undergo a criminal background check.

The suit argues that Sheriff Grady Judd is misusing emergency shelters as “unlawful pedestrian checkpoints to conduct suspicionless warrant/criminal background checks on human beings desperate for shelter.” The Orlando Sentinel and the Washington Post have coverage.

The suit says Andres Borreno of Virginia was ordered to undergo a criminal background check when he tried to enter a shelter on Sept. 9, violating his right to be free of unreasonable searches.

Grady had aired his shelter policy in a series of tweets before Hurricane Irma hit Florida. Grady had said those trying to enter shelters with outstanding warrants would be escorted to “the safe and secure shelter called the Polk County jail.” He also said sex offenders and predators would not be allowed in shelters.

Judd told the Orlando Sentinel that the suit was filed “for free press and it’s obviously frivolous. I have a nationwide profile and they see it as an opportunity for nationwide press.” He said on Sunday that 43 sex offenders were being sheltered in an area of the Polk County jail that is not behind bars.

Nexus Caridades Attorneys Inc. has also filed a suit that claims a Tennessee judge and sheriff violated inmates’ constitutional rights through a program offering reduced jail time if they undergo vasectomies or get contraceptive implants.