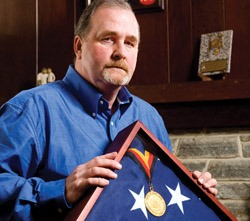 The U.S. Supreme Court has ruled 8-1 that the First Amendment protects anti-gay picketers at military funerals from tort liability.

The picketers, members of the Westboro Baptist Church in Kansas, show up at military funerals to publicize their belief that service members’ deaths are punishment for tolerance of homosexuality. They carry signs with slogans such as “God Hates Fags” and “Priests Rape Boys.”

Albert Snyder, the father of a slain Baltimore serviceman, had been awarded $10.9 million in damages, later reduced to $5 million, for the emotional distress caused by the picketing.

The award must be overturned, the Supreme Court ruled, because the peaceful protest at a public place addressed matters of broad interest to society. “Such speech cannot be restricted simply because it is upsetting or arouses contempt,” Roberts said in the majority opinion.

Snyder had argued the protesters’ speech was a matter of private rather than public concern because the demonstration was staged at a private funeral. Roberts, however, disagreed.

Signs reading “Fags Doom Nations” and “Pope in Hell” carry messages that “may fall short of refined social or political commentary,” Roberts wrote. But “the issues they highlight—the political and moral conduct of the United States and its citizens, the fate of our nation, homosexuality in the military, and scandals involving the Catholic clergy—are matters of public import.”

Roberts also noted that the picketers protested on a plot of land adjacent to a public street, behind a temporary fence, about 1,000 feet from the church where the funeral was being held for Marine Lance Cpl. Matthew Snyder. Church members displayed signs, sang hymns and recited Bible verses. “Any distress occasioned by Westboro’s picketing turned on the content and viewpoint of the message conveyed, rather than any interference with the funeral itself,” Roberts said.

“Westboro believes that America is morally flawed; many Americans might feel the same about Westboro,” Roberts said. “Westboro’s funeral picketing is certainly hurtful and its contribution to public discourse may be negligible. But Westboro addressed matters of public import on public property, in a peaceful manner, in full compliance with the guidance of local officials. …

“Speech is powerful. It can stir people to action, move them to tears of both joy and sorrow, and—as it did here—inflict great pain. On the facts before us, we cannot react to that pain by punishing the speaker.”

Alito’s dissent argues that Albert Snyder was not a public figure, and there is no First Amendment right to “brutalize” the grieving father. Alito was also the dissenter in a First Amendment ruling last year striking down a law that bars depictions of animal cruelty.