This federal judge called cops to report squeegee guys who gave him the finger, spat on his car

A federal judge overseeing a consent decree requiring police reform in Baltimore called police in that city Oct. 16 to report two hostile squeegee men working at an intersection in the Bolton Hill neighborhood in Baltimore.

Chief U.S. District Judge James K. Bredar of the District of Maryland said the workers gave him the finger, spat on his car and wrote “racist” on his car windows after he turned down their services.

The Baltimore Banner broke the news, followed by a story published by the Baltimore Sun and the Washington Post and stories by WMAR, WBAL and Fox Baltimore.

Police gave one of the squeegee workers a warning and told him to “to cease further squeegee-related activity at the location.”

Bredar addressed the squeegee guys when discussing the consent decree in August. He said the decree didn’t ban “vigorous enforcement” against squeegee workers, according to the Washington Post and the Baltimore Sun. 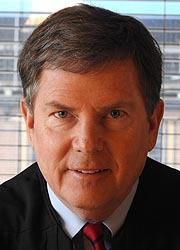 “Generally speaking, city leaders will decide whether enforcement action should be taken with respect to the squeegee issue,” Bredar said. “The terms of the consent decree will regulate how that enforcement action is carried out.”

DeRay Mckesson, founder of the nonprofit Campaign Zero, which works to eliminate police violence, said Bredar should be removed from overseeing the consent decree, according to the Washington Post and the Baltimore Sun.

“The judge has clearly shown that he is not a neutral party and believes that the solution to the challenges our city faces are solved by calling the police on Black men and boys—the key issue that forced the consent decree to exist,” Mckesson said.

Squeegee disputes in Baltimore have led to violence in the past. This summer, a man who confronted squeegee workers with a bat was shot and killed. A juvenile has been charged with murder; his lawyer says he acted in self-defense.

In another incident, a 26-year-old Baltimore man grilled three squeegee workers to find out who stole $2,200 from his mother’s Cash App, according to a prior story by WMAR. According to police, the man started firing his gun at the workers, striking two of them.