Top 10 Quotes From the Sotomayor Hearings 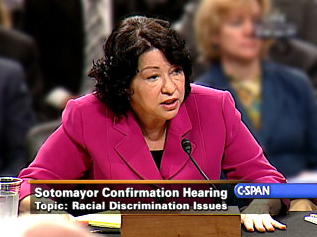 In three-and-a-half days before the Senate Judiciary Committee, 2nd U.S. Circuit Court of Appeals Judge Sonia Sotomayor was an often-elusive witness, as has been the case with several recent U.S. Supreme Court nominees. Senators sought to understand her views on issues that are likely to come before the court; for that very reason, she often said she could not answer.

But there may be a few quotes that will live on in the public imagination and future news stories, should the full Senate vote to confirm her. Below are 10 of the most interesting soundbites from her testimony, listed in no particular order:

“The progression of my life has been uniquely American.”

“Fidelity to the law” — Sotomayor’s description of her judicial philosophy.

“No words I have ever written or spoken have gotten [as] much attention” as her comments in several venues about a “wise Latina” judge, including this 2001 construction: “I would hope that a wise Latina woman with the richness of her experiences would more often than not reach a better conclusion than a white male who hasn’t lived that life.” In her testimony, she explained that “I was trying to inspire Latino students to believe that their lives could be inspired. That they could become anything that they wanted to become.”

“Life experiences have to influence you. We are not robots,” as judges.

“My reputation is that I ask the hard questions [of lawyers at oral argument], and I do it for both sides.”

Asked about the approximately $200,000 that associate justices earn, Sotomayor said she can “suffer through” a career with that compensation. “I’ve been living on this pay for years.”

Sen. Al Franken, (D-Minn.), referring to a TV show Sotomayor loved as a child, asked “What was the one case in Perry Mason” that he lost?

“And you don’t remember that case?” he asked. “Didn’t the White House prepare you for that?”

Sen. Tom Coburn (R-Okla.), asked about citation to foreign laws in U.S. decisions. “Is it important that we look good to people outside this country?” he asked.

“We don’t render decisions to please the home crowd—or any crowd,” Sotomayor responded.

Sen. Jon Kyl (R-Ariz.) cited a statement by President Obama that “the law will take you 25 miles of the 26-mile marathon, but the rest of the decision is what’s in a judge’s heart. Do you agree?” he asked Sotomayor.

“No, sir,” said Sotomayor. “The law decides what a judge does.”

“Has there ever been a case where you’ve been guided by your gut?”

“Well,” said Sotomayor, “lawyers have said to me that I’ve been.”

Kyl followed: “Has there always been a legal basis for your opinions?”