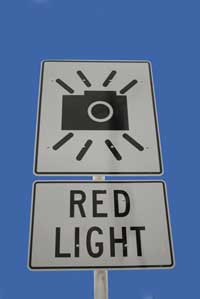 Two Florida judges on Monday dismissed 24,000 red-light-camera tickets from nearly every city in Broward county, finding that they were not issued as required by state statute.

“We made the argument that the program was an improper delegation of police power because the videos were being sent out of state for employees of American Traffic Solutions to do the screening,” attorney Ted Hollander of Ticket Clinic told the South Florida Sun-Sentinel, adding: “You can’t enforce one law and break another, which is what these cities have been doing for the better part of four years now.”

Workers at Arizona-based ATS screened the photos taken by red-light cameras, then returned them to local police for actual tickets to be issued, the newspaper explains. However, this procedure violated state law, “in that the city’s representative does not actually create or issue the Uniform Traffic Citation,” says a court order issued Monday concerning Fort Lauderdale, reports WPLG.

Municipal officials throughout Broward County reportedly are working on revising procedures to get a green light on continuing to issue $264 red-light tickets.

Orlando Sentinel: “Hundreds of thousands could get refunds for red-light camera tickets”