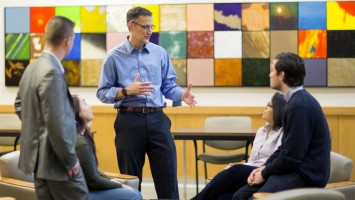 Faced with a shortage of attorneys outside major cities, the Nebraska legal community has launched a program aimed at creating more of them.

According to a press release from the University of Nebraska College of Law, the law school will work with three undergraduate institutions to recruit college freshmen from rural areas who are interested in becoming lawyers. The students will get free tuition at Chadron State College, Wayne State College or the University of Nebraska at Kearney. They’ll also visit the law school regularly to sit in on classes, hear lectures, observe court proceedings and network. Once a year, they’ll meet with law school personnel, and as rising seniors, they’ll do legal internships in rural Nebraska.

If the students maintain a 3.5 GPA and score well enough on the Law School Admissions Test, they’ll be automatically admitted to the College of Law. The students will then be expected to start their careers in areas outside Nebraska’s cities. Richard Moberly, interim dean of the College of Law, says this will increase access to legal services and encourage economic development in those areas.

Like several other states, Nebraska has found a shortage of practicing attorneys in rural areas. According to the Nebraska State Bar Association, 11 of Nebraska’s 93 counties have no attorneys at all; 31 others have three lawyers or fewer. Those who do still practice in rural areas tend to be older attorneys with no one available to take over when they retire.

Lyle Koenig, chair of the Rural Practice Initiative Committee at the Nebraska State Bar Association, says he’s personally seen a decline in rural lawyers over the past 20 years. Koenig has practiced law for 44 years, mostly in Beatrice (population 12,459 at the 2010 Census) and Hebron (population 1,579).

“Now it really seems to be like pulling teeth. It just seems impossible to get people to come out” to rural areas, Koenig told the law school.

The Rural Law Opportunities Program is modeled after a similar program established in 1990 for Nebraskans interested in rural health care careers. Through that program, personnel at the University of Nebraska Medical Center learned that graduates are more likely to work in a rural area if they came from one. 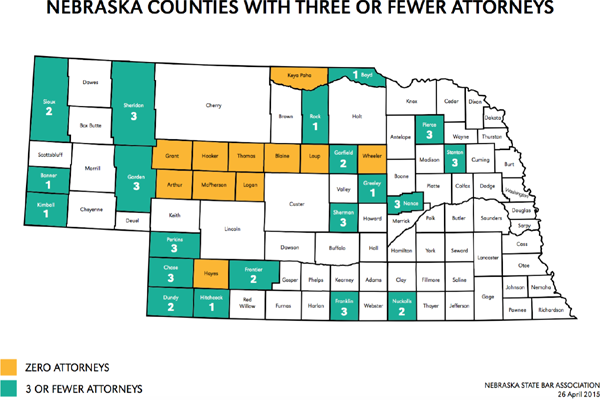 ABA Journal (2014): “In rural America, there are job opportunities and a need for lawyers”