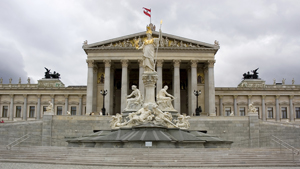 Even Vienna, a major European capital that counts plenty of diplomatic meetings, treaty conferences and academic gatherings in its history, probably has never seen something quite like the World Justice Forum set to convene this week in the ancient city along the Danube.

That’s because the forum appears to be the first of its kind.

Meetings to discuss the rule of law are nothing new. But what is unique about the World Justice Forum, say its organizers, is that it reaches beyond the legal profession by bringing together representatives of various professional disciplines from regions around the world to seek consensus on how to advance the rule of law as the foundation for societies of equity and opportunity.

Nearly 500 invitees will attend the forum being held Wednesday through Saturday at Vienna’s Austria Center. They will come from at least 95 different countries and represent 15 different disciplines, says William C. Hubbard, who chairs the Commission on the World Justice Project. The attendee list is chock-full of luminaries, including Ireland’s former President Mary Robinson, who is now president of Realizing Rights: The Ethical Globalization Initiative; and former Romanian President Emil Constantinescu.

“I don’t know of another gathering with such broad and varied participation that has had the rule of law as its focus,” says Hubbard, a partner at Nelson Mullins Riley & Scarborough in Columbia, S.C., and incoming chair of the ABA House of Delegates.

“We’re not bringing these people together just to talk,” says Hubbard. The goal is to create multidisciplinary networks and identify projects that can be implemented on the ground in countries around the world. The forum is organized to bring attendees together in small working groups to develop ideas for accomplishing those goals.

The project is a centerpiece of the World Justice Project launched by ABA President William H. Neukom and based on the premise that adherence to certain rule-of-law principles is necessary for a community to offer opportunity and equity to its members through free and fair government.

“The absence of the rule of law consigns billions of people—well over half the world—to lives characterized by corruption, violence, poverty, sickness and ignorance,” says Neukom, a partner at K&L Gates in Seattle. “The World Justice Forum is a historic opportunity to launch a new multinational, multidisciplinary movement that can give people and nations new hope.”

One of the anticipated highlights of the forum will be the unveiling of the initial results from test runs of the Rule of Law Index. The purpose of the index is to measure in some factual way how effective countries are in adhering to the rule of law.

The index was tested in a format that combined general population polls, surveys of experts and existing data, says Mark D. Agrast, a member of the commission who coordinated this aspect of the World Justice Project. Testing was conducted in the United States, Argentina, Australia, Colombia, Spain and Sweden. A second somewhat more intensive variation of the index was tested in the United States, Chile, India and Nigeria. The Vera Institute of Justice in New York City conducted fieldwork for the initial tests.

Data analysis was still going on in the final days leading up to the forum, and the results will be reported in Vienna, says Agrast, a senior fellow at the Center for American Progress in Washington, D.C. But he cautioned against looking for a scorecard of results.

“We’re not scoring countries,” says Agrast. Instead, the index test results measure the effectiveness of the countries tested in meeting certain criteria that help define the rule of law. Those measures will have some comparative aspect to them, he notes.

What the testing has shown, says Agrast, is that the Rule of Law Index is viable. “It’s been very successful,” he says. “We think the methodology has proved itself to be flexible and robust.” He estimates that it could be possible to conduct similar evaluations in some 100 countries over three years.

Whether decisions on that sort of thing will be made at the forum is uncertain. Hubbard and Agrast say the forum should be viewed not as the project’s culmination, but rather as the launchpad for further efforts in what likely will be a long-term process.

One issue is what future existence the World Justice Project will have. Under Neukom’s leadership, the ABA has been the primary moving force behind the project, although it also is sponsored by a lengthy list of organizations representing various disciplines and has received funding and other support from a number of sources, including the Bill & Melinda Gates Foundation, the Ford Foundation and Irish Aid, a branch of Ireland’s Department of Foreign Affairs.

Hubbard anticipates that as the project moves forward, it will be less “ABA-centric,” with leadership that will be more multinational and multidisciplinary.

Advancing the rule of law “clearly is not an undertaking designed to conclude at the forum,” says Hubbard. “Just the contrary. The forum is a starting point.”

Related Coverage from the ABA Journal:

Questions for the Justice Project (The State)