Wesley Brown, a Kennedy Appointee and Oldest-Sitting Federal Judge, Has Died at 104 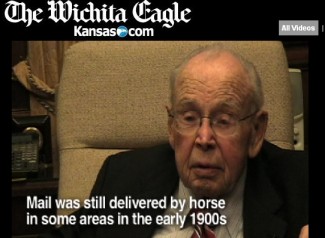 Corrected: U.S. District Judge Wesley Brown, who continued working in Wichita until about a month ago, has died. He was 104.

“There comes a time, and he was just ready,” said Judge Monti Belot, who served as Brown’s law clerk years before joining Brown on the federal bench.

Appointed to the bench by President John F. Kennedy, this year he set records for being among the longest serving judges and oldest sitting judge.

His federal court biography notes that when we was sworn in on April 12, 1962, well-wishers were reminded that this then-new judge was a self-made man who once peddled the Saturday Evening Post, worked a drugstore soda fountain and manned a Ford Assembly Plant line on the night shift. He held the Ford job while attending law school at Kansas City School of Law.

He served as County Attorney for Reno County, Kansas, from 1935-1939, then practiced general litigation and labor law. He became a lieutenant in the U.S. Navy during World War II. After his service in the Pacific, he returned to practice and in 1958 was appointed a bankruptcy referee in Kansas. After his confirmation to the district court, Brown served on the Judicial Conference’s Committee on Bankruptcy. He was chief judge from 1971 until 1979, when he took senior status.

The Eagle reports that Brown continued to hear a full docket past the age of 100, but when part time during the past year.

In a profile of Brown last year, when he was 103, the New York Times reported that in the judge’s early years, he was well known for his temper, showing no patience for “lateness, casual dress and the unacceptably imprecise word ‘indicate,’ ” One defense lawyer reportedly used to take a Valium before appearing before the judge.

But the Times noted that the judge mellowed in his later years, with lawyers describing him as “sweet” and “inspirational.”

The Federal Judicial Center, which notes milestones for the federal bench, notes that while the record for longest-serving federal judge is held by former 8th Circuit Judge Joseph W. Woodrough, who served 61 years as a federal judge in Nebraska (1916-1933) and on the 8th Circuit (1933-1977). He was 104 when he died in 1977.

Last updated to note that while Brown was among the longest-serving federal judges, that record is held by the late 8th Circuit Judge Joseph Woodrough, who sat on the bench for 61 years.