How Uber, Postmates, DoorDash and the gig economy are disrupting the legal industry 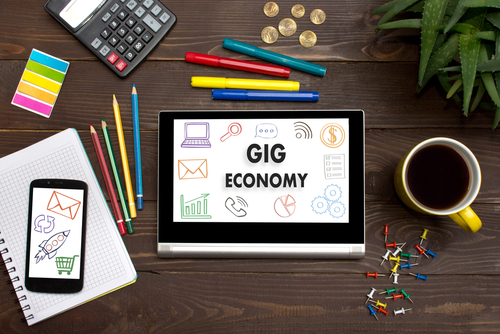 Uber, Grubhub, Amazon Prime Now—these are just a few companies that might come to mind when you think of the gig economy. But this developing industry of independent workers is much more than ride-share and food-delivery services.

During a panel at ABA Techshow 2019 on Friday, Basha Rubin, CEO and co-founder of Priori Legal, and Emily M. Wajert, an associate at Kramer Levin Naftalis & Frankel, shared advice on “Succeeding in a Gig Economy.”

While Rubin and Wajert began by displaying the logos of businesses such as Lyft and Postmates, Rubin emphasized that “traditional companies” are now relying on independent workers more than ever.

“The gig economy is permeating every aspect of our lives, and it is more likely than not here to stay,” Rubin said. With 31 percent of working adults participating in the gig economy for an average of five hours per month, this trend has novel legal ramifications, she said.

“Arguably, the biggest legal challenge that gig employers face is the classification of their workers as independent contractors or as employees,” Wajert said. “This can be really difficult for gig employers to figure out because classification tests vary not only from state to state but also sometimes within states.”

Wajert outlined two different classification tests: the economic realities test, which is used by the U.S. Department of Labor, and the ABC Test, which California adopted just last year in a court decision that sparked controversy.

The economic realities test looks at six factors to classify a worker: integrality, managerial skill, relative investment, special skill, permanence of relationship and degree of control. But these elements are not always weighed equally.

In Razak v. Uber Techs., Judge Michael Baylson of the U.S. District Court for the Eastern District of Pennsylvania held that UberBlack drivers were independent contractors despite them only meeting four out of the six criteria. The other two factors, integrality and special skill, were less significant to the judge.

On the other hand, the ABC Test has only three prongs. Courts and agencies look at freedom from control, service outside usual course of business and independent trade. These factors rely on the presumption that independent contractors are not integral to the company while employees are. 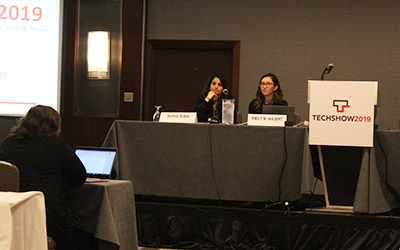 Basha Rubin and Emily M. Wajert at the “Succeeding in a Gig Economy” panel at ABA Techshow 2019 in Chicago. Photo by Elissa Gray.

“This is problematic because, of course, the work that their workers do is an essential part of their business model,” Wajert said.

In response to the case that established the ABC Test in California, Dynamex Operations West Inc. v. Superior Court of Los Angeles County, major gig economy players—such as Uber, Lyft, Instacart and DoorDash—wrote a letter to the legislature opposing the decision, although nothing has been changed yet.

Companies care about the relevant test because classification carries a significant financial risk. The estimated overall cost increase for classifying a worker as an employee instead of as an independent contractor is 20 to 30 percent, Rubin said.

Workers also are in danger when it comes to misclassification. While independent contractors have flexibility, employees receive benefits, worker protections and different tax regulations. This doesn’t necessarily mean that one category is superior but simply that correct classification should be a priority.

As a result of the stakes for classification, Wajert provided four tips for lawyers who are representing gig companies.

Whether you’re a business owner, a lawyer or a worker, understanding the nuances of this economic model serves a greater purpose.

“What’s at stake here is being able to benefit some of the most marginalized people in our economy,” Rubin said. “I think it is incumbent upon all of us to think about how we can create a system that’s serving everybody better.”