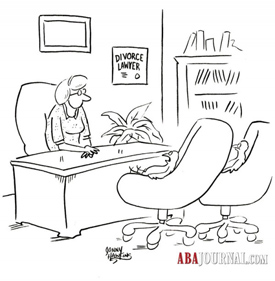 Of the nearly 200 cartoon caption entries this month, there were dozens of plays on Twitter/tweets. Same goes for empty-nesters and disputes over the couple’s nest egg. Staff favorites are below. Now it’s your turn to vote on the entry that will appear in an upcoming issue of the ABA Journal.

• He never pays attention to me. All he does is tweet all day. —submitted by Janice Ramsay of Irvine, California

• Really, our only issue is how to divide the nest egg. —submitted by Brent R. Cromley of Billings, Montana