Why study the Constitution? It's old and doesn't address current concerns, Posner says 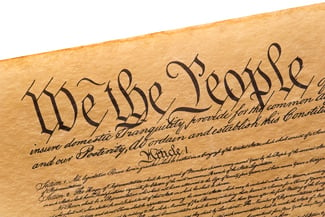 Updated: Judge Richard Posner thinks liberal academics are going too far in praising Justice Antonin Scalia after his death. And he questions the need for judges to spend too much time—or even a second—studying the Constitution.

Posner made those controversial comments in a post for Slate’s Supreme Court Breakfast Table, report the Wall Street Journal Law Blog and the Washington Times. Posner, a judge on the Chicago-based 7th U.S. Circuit Court of Appeals, writes:

“I worry that law professors are too respectful of the Supreme Court, in part perhaps because they don’t want to spoil the chances of their students to obtain Supreme Court clerkships. I think the Supreme Court is at a nadir. The justices are far too uniform in background, and I don’t think there are any real stars among them; the last real star, Robert Jackson, died more than 60 years ago. I regard the posthumous encomia for Scalia as absurd. Especially those of Harvard Law School Dean Martha Minow and Justice Elena Kagan.

“And on another note about academia and practical law, I see absolutely no value to a judge of spending decades, years, months, weeks, day, hours, minutes, or seconds studying the Constitution, the history of its enactment, its amendments, and its implementation (across the centuries—well, just a little more than two centuries, and of course less for many of the amendments).

“Eighteenth-century guys, however smart, could not foresee the culture, technology, etc., of the 21st century. Which means that the original Constitution, the Bill of Rights, and the post-Civil War amendments (including the 14th), do not speak to today. David Strauss is right: The Supreme Court treats the Constitution like it is authorizing the court to create a common law of constitutional law, based on current concerns, not what those 18th-century guys were worrying about.

“In short, let’s not let the dead bury the living.”

Posner made similar comments in a Dallas Morning News interview published in March. “I don’t think judges should pretend that they’re obtaining guidance from old statutes, constitutional provisions or decisions when they’re not,” he said. “Because those old rulings are obsolete.”

Precedent should be followed when there is “a reliance factor,” Posner said, but there shouldn’t be much weight given to “long-past, old decisions.”

Posner said that, when a problem hasn’t been foreseen, he endorses using pragmatism to arrive at the decision with the best overall consequences based on present-day conditions. After determining the pragmatic decision, the next step is to determine whether that decision is blocked by statute or constitutional provision.

“Modern interpreters should attend to various elements of the Constitution’s original intent not because these old unwritten understandings always and everywhere tightly bind us today, but rather because we can learn from our constitutional predecessors. The evils that they lived through—that they experienced firsthand at epic moments in American history such as the Revolution and the Civil War—can help us understand why they put certain things in the text, to spare us from having to suffer as they suffered. Various rights emerged from real wrongs, wrongs we ignore at our peril.”

The Wall Street Journal Law Blog asked Posner about his comment on praise for Scalia. “My principal criticism was not of Scalia, but of what seems to me the hypocrisy of those liberals who are praising Scalia so extravagantly,” he told the Law Blog in an email.

“Some of my contributions this year have drawn an unusual number of criticisms, focused on language I used that could be read as suggesting that I don’t think the Constitution has any role to play in interpreting the law—that it should be forgotten; that constitutional law is and must and maybe should be entirely a judicial creation, like fields of common law.

That was not my intention, and I apologize if carelessness resulted in my misleading readers. …

“Many [constitutional] provisions are quite vague. The vagueness was almost certainly intentional, one reason being the tensions among the 13 states, which required compromise. Such compromises frequently involve avoidance of precision, thus allowing all the parties to the compromise to believe that their interests are not being neglected by the majority. …

“The framers of the Constitution cannot communicate with us regarding issues that they deliberately left vague, probably because they couldn’t agree on how or whether the text of the Constitution resolved the issues. (We know about these differences from the debates between the Federalists and Thomas Jefferson’s Democratic-Republican Party during the early years of the new nation.) Today’s judges are left to do the best they can, within the boundaries they perceive in phrases such as ‘due process,’ or ‘cruel or unusual.’ Their efforts in the aggregate create ‘constitutional law’ based on what is sometimes called the ‘living Constitution.’

“That’s all I meant to say, and it is by no means original with me. I regret not having been clearer.”