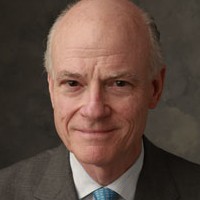 His term may have expired, but William Hubbard continues to champion the work of one of his primary initiatives as president of the ABA: The Commission on the Future of Legal Services.

Hubbard took part in a spirited question-and-answer session at ABA Techshow on Thursday and spoke about his reasons for creating the commission, as well as how technology can help close the access-to-justice gap in the United States. Taking questions from co-presenter Ramón Abadin, president of the Florida Bar, as well as from the capacity crowd inside a conference room at the Chicago Hilton, Hubbard said that he had been concerned about the changes and shifts within the legal profession even before he took office, and that the commission was one of the ways he hoped to bring awareness to the bar at large.

“I’ve found that, despite the good work of the people at Techshow, most lawyers were unaware of these seismic changes, as well as the opportunities technology and innovation were providing to make our practices better,” Hubbard said.

One of his biggest concerns was the fact that millions of Americans are simply unable to afford adequate legal representation. Hubbard said 80 percent of litigants remain unrepresented in all civil matters, while 80 percent of family court litigants and nearly 90 percent of tenants in housing disputes go pro se. The problem isn’t limited to those practice areas, as Hubbard pointed out that in the Chicago-based 7th U.S. Circuit Court of Appeals, nearly half of all appeals are filed pro se, and not all of them are prisoners. He also noted that 96 million Americans at some point have qualified for help from the Legal Services Corporation, but that the LSC could only accommodate about half of them.

“If the justice gap is as large as I described, then we aren’t serving the public,” Hubbard said.

Hubbard pointed to technology as one way to help ease this access-to-justice gap, and mentioned online dispute resolution, do-it-yourself court kiosks, virtual courthouses and use of trained nonlawyers for assistance with certain matters as several innovations that are already being utilized throughout the United States. However, he also noted that it was important for lawyers, bar associations, state supreme courts and legal services providers to work together to come up with viable long-term solutions. To illustrate his point, Hubbard pointed to the Limited License Legal Technician program in Washington state as a success story.

“Once it works somewhere, you can take the model national,” Hubbard said. “LLLT’s are not taking business away from lawyers—they’re trying to help people who have no help.”

As several attendees pointed out during the lengthy question-and-answer session, that could be easier said then done. One Florida lawyer pointed out that it’s hard for him and others to engage with nonlawyer providers because of strict regulations and ethical rules. Abadin, his state bar president, was sympathetic, noting that advertising restrictions, as well as rules about referrals, splitting fees, and legal ethics made it tough for lawyers to do this.

“When we were the only game in town, we didn’t have to worry about stuff like this” Abadin said. The way to change this is to get the Florida Supreme Court to do it, Abadin said.

Hubbard noted that the ABA had tried to modify its Model Rules in the past with its Ethics 20/20 initiative, only to run into a roadblock.

In that regard, Hubbard was heartened by what happened in February at the ABA Midyear Meeting when the House of Delegates approved a model resolution for states to regulate nontraditional legal services. Hubbard also revealed that the commission was trying to finish its report, as well as look at potential resolutions to submit to the House of Delegates at the ABA Annual Meeting dealing with the future of legal services.

“The process is well underway,” Hubbard said. “In the end, it’s about making the argument about how to best serve the public. Stay tuned.”