Gender-neutral bathrooms are more plentiful at Yale Law School, thanks to student efforts 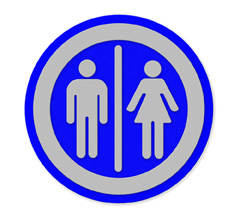 A student group at Yale Law School is celebrating a three-year successful effort to add gender-neutral bathroom stalls to the school.

Yale Law School added two new gender-neutral, multi-stall bathrooms in December, bringing to 20 the number of gender-neutral bathroom stalls available to students at the Sterling Law Building, report the the Yale Daily News and the Connecticut Law Tribune. Before that, the school had 14 gender-neutral, single-stall units.

A group for lesbian, gay, bisexual and transsexual law students called the OutLaws had pushed for the gender-neutral bathrooms. One obstacle was the state building code, which required a minimum number of bathrooms for men and women. Gender-neutral bathrooms did not count toward the total. That meant Yale Law School would have to add bathrooms, rather than convert existing bathrooms.

The law school had requested a building-code exemption to allow restrooms to be designated as gender neutral. The request was denied in March 2017, and the school filed an administrative appeal. Connecticut’s governor later said he would back Yale’s request.

The OutLaws had also supported changes to the Connecticut Building Code, persuading about two dozen state groups to also back the amendments, the Hour had reported last year. Connecticut’s October 2018 building code now states that single-user bathroom facilities “shall contribute towards the total number of required plumbing fixtures for a building.” The code also states that single-user toilet facilities “shall be identified for use by any person.” (See Chapter 29 changes here and here).

Hannah Hussey, co-president of the OutLaws, told the Yale Law Daily News that the gender-neutral stalls are “a really positive step.”

“I think it sends a really strong message that YLS recognizes that gender is not always a binary,” Hussey said.