How lawyers can optimize performance under pressure 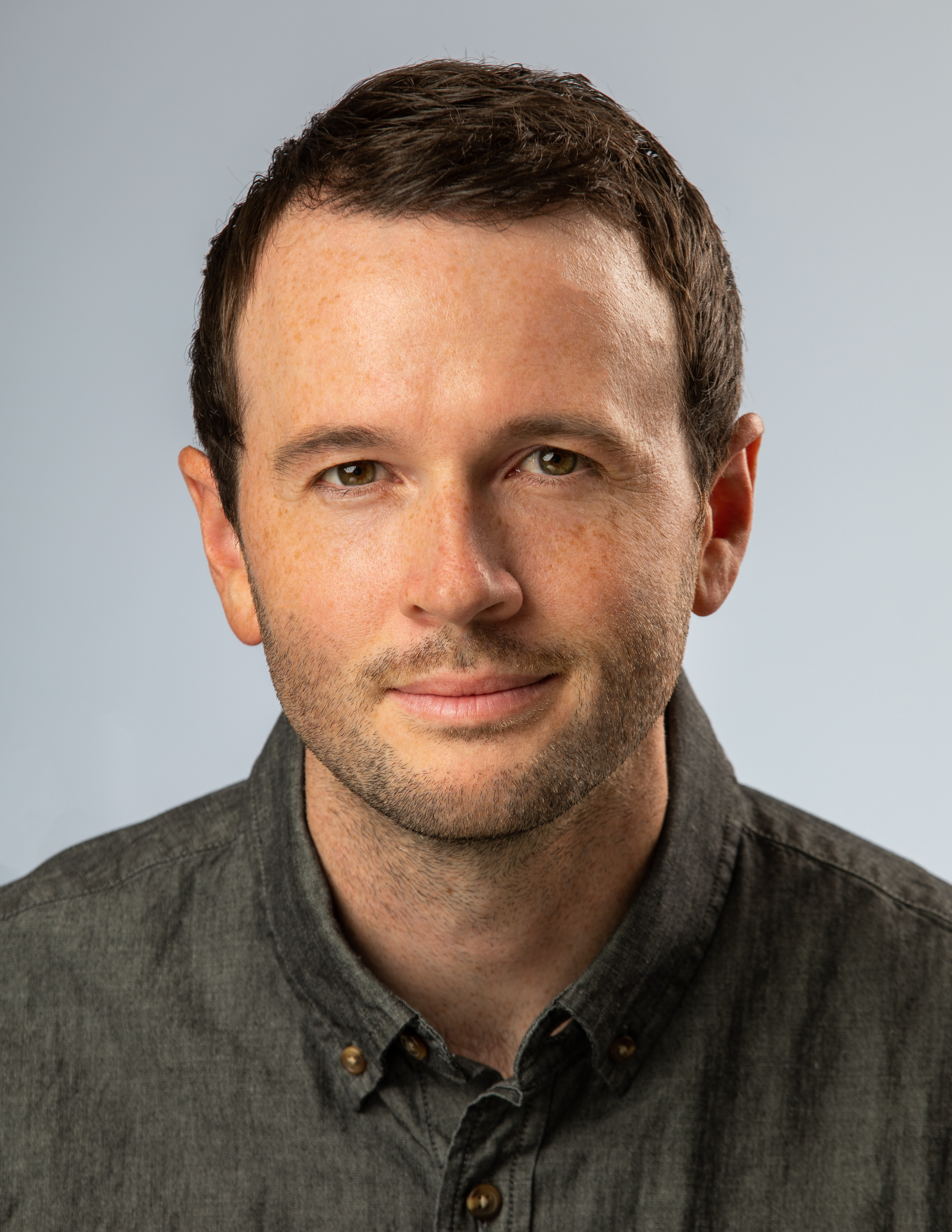 From hostage rescuing and fast roping to skydiving and stress shooting, the United States Special Operations Forces has mastered the ability to remain cool under pressure.

And sure, while some operators (as we commonly referred to them within the community) naturally possess a proclivity to handle general day-to-day stress well, the fact remains that these individuals are also equipped with the mental skills necessary to thrive under increasingly high levels of operational stress. Training and coaching programs delivered from fully embedded performance psychology consultants have become the norm.

If it isn’t wholly apparent by now, I am not from your community—the legal community, that is. I am not a lawyer, nor have I ever been to law school. My career has been with the military, holding fully embedded performance psychology consultant positions within the special operations community.

I often hold the perspective of an outsider, or someone who has demonstrated mastery over mental and physical states that contribute to optimal performance, not necessarily the technical aspects of the performance itself.

Understanding performance psychology is something from which everyone can benefit, particularly lawyers. In law, continuous disappointment during key moments may degrade one’s standing within a firm, ability to take on new clients, and it may deleteriously influence who gets promoted or who makes partner. It should not go unstated that relationships between performance and psychological well-being may also exist.

Optimal performance is all but predicated on the ability to properly modulate your psychophysiological state—thoughts and emotions in relation to the body. While the consequences of poor performance are not as tremendous as those seen within the military, acute manifestations of stress are experienced all the same.

Increases in heart rate, respiration and blood pressure work to prime the body to “fight” in order to ward off danger, or to “flight” and run away. This biological mechanism is especially useful when there is a need for hand-to-hand combat; less so when the threat of bodily harm does not exist. From a cognitive standpoint, we tend to experience diminished decision-making ability (cognitive tunneling, marked by increased rigidity and less flexibility) during extreme stress.

Interventions to develop skills for calmness under pressure have been utilized within other high-stress occupations (athletes, surgeons, military, police, performers, etc.). Unlike these other professions, where success is predicated on physical movement, performance within the legal profession is mental. It relies on a confluence of cognitive, social and emotional factors, such as the ability to verbally convey key points and details in front of peers, to make a good first impression with a potential client, or to manage facial expressions and emotional reactivity all viewable by a judge or jury. These aspects of performance within the profession all hinge on the individual’s ability to evoke an appropriate state.

Lawyers can develop skills to improve their performance through well-defined intervals, drawing on performance psychology principles. Below, I’d like to offer steps lawyers can take to become better equipped to manage the fight or flight response around a defined stressful event.

Weeks before the event

Education: One’s thoughts hold a powerful influence over their physiological state. Studies have shown if you interpret the feelings of stress as helpful toward performance rather than harmful, there will be marked differences in hormonal secretion (DHEA/Cortisol ratio). The interpretation of situations as threatening to one’s livelihood or ego will result in heightened activity of the “fight or flight” branch of the autonomic nervous system (sympathetic).

Once we become aware of this relationship, we can begin to notice themes within our own specific thoughts and behaviors exhibited under stress (Do my thoughts tend to focus on internal processes like my own emotions and the corresponding physiological sensations? Or perhaps more externally based stimuli, the faces in the crowd, etc.?), setting the stage for more effective regulation.

Stress inoculation: Preparation within the special operations community is inherently stressful, particularly because it is dangerous. The level of danger doesn’t allow operators to just “go through the motions”; they take their training seriously. It also isn’t uncommon for practice to be more stressful than the actual performance, which is a great preparatory tool.

While it wouldn’t make sense to mimic this level of danger within mock trials or other practices of the law community, it might make sense to increase the level of pressure during meaningful rehearsals. Perhaps, practice in front of a boss or individuals who possess the ability to make you nervous. This can provide an opportunity to see how your body responds when you get stressed and offer a way to practice regulation.

Look toward mastery: Winning matters—we don’t want to downplay this. However, the proper integration of performance goals and mastery-oriented goals—those that emphasize learning and skill-building—will not only enhance performance and optimize motivation but influence performance anxiety as well. The good news is that one doesn’t have to come at the expense of the other; lawyers can focus on honing their craft while also trying to achieve the smaller wins.

Immediately before the event

Accurately appraise state: In order to regulate emotional and physiological states, one must first become aware of the state to which they are in currently. We can depict this relationship on an “inverted-u” graph. According to the graph, a certain level of arousal—feeling “hyped up” or like you are pumping with adrenaline—is helpful toward performance; it may aid in the ability to come to appropriate conclusions or make real-time decisions. Eventually, however, we reach a point of diminished returns, where too much arousal harms performance, ultimately hindering the ability to respond.

Next time you are getting ready to go into the courtroom, or into a meeting, take a brief pause and figure out where you are on the inverted-u. 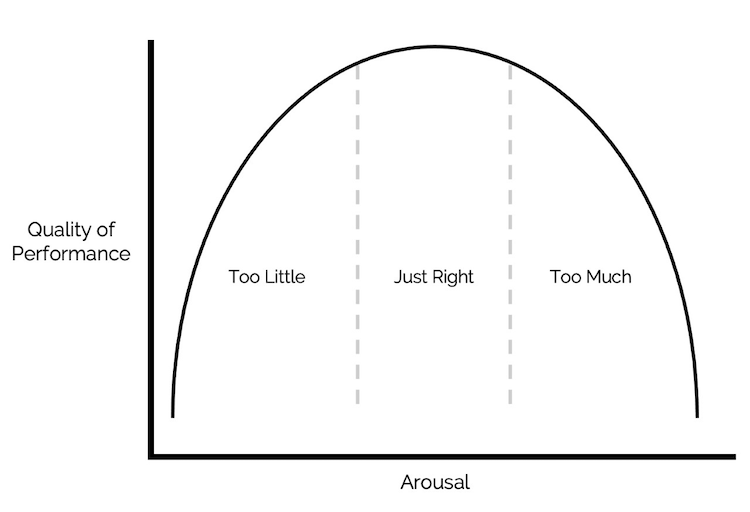 Chart of the Yerkes-Dodson Inverted-U provided by Joe Beyer.

Leverage self-talk: Using our internal dialogue to interpret the byproducts of “fight or flight” response (heart rate, respiratory rate, etc.) as “bad” or something that will ultimately degrade performance, becomes self-fulfilling.

Next time you are nervous, reinterpret this feeling to be something you need, rather than something that will hold you back.

Focus on the breath: Breath work provides an opportunity to modulate psychophysiological state, or to evoke feelings of calmness while maintaining heightened alertness. In general, heart rate speeds up during inhalation and slows on exhalation. Therefore, by elongating our exhales and spending more time exhaling, we can begin to slow our heart rate down. A 40% inhale and 60% exhale are common rules of thumb for this.

Shift your focus: Most performances will not allow enough time to take a break to focus on your breath or thoughts in order to self-regulate, so let it rip! Now is not the best time to be introspective. Nor should we contemplate our emotional state; instead we should place an emphasis on shifting the focus from our “state” to relevant aspects of the task.

Performance matters, and one’s mentality toward it shouldn’t be left to chance. By taking the time to deliberately draw attention to our thoughts and physiology prior to performance, we can ensure that optimal outcomes will be more likely to happen. So next time you are getting ready to enter a potentially stressful situation, take a brief pause to check in to determine how you are feeling and what you can do to influence your state, or to be cooler under pressure.

Editor’s note: The views expressed are those of the author and do not reflect the official policy or position of the Department of Defense or the U.S. government.

Joe Beyer has 10 years of experience as an embedded performance psychology consultant for the U.S. military, five of which were with the Navy SEALs. He is a three-time graduate (PhD, MSE, BSE) of the University of Kansas. His doctoral dissertation centered on psychological skills training and motivational climate.