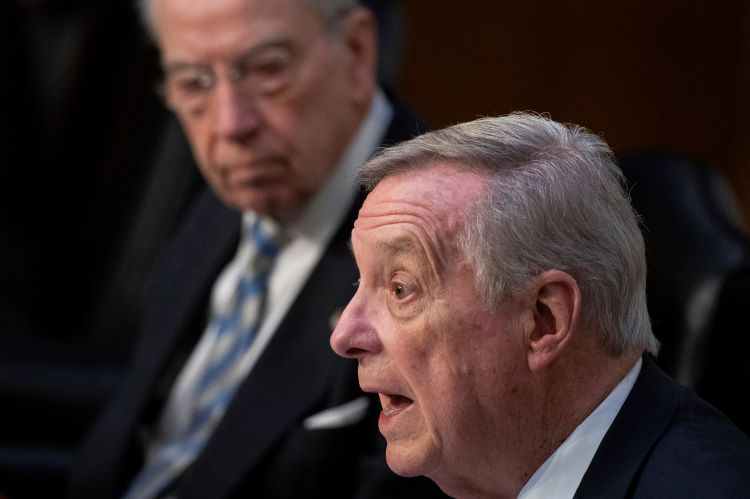 Senate Judiciary Committee Chairman Dick Durbin, a Democrat of Illinois, speaks during the confirmation hearing for the nomination of Judge Kentanji Brown Jackson to the U.S. Supreme Court on Wednesday. Photo by Graeme Sloan/Sipa USA via the Associated Press.

In his opening statement, Durbin said the overwhelming majority of questions Tuesday were respectful.

“But for many senators, yesterday was an opportunity to showcase talking points for the November election,” Durbin complained.

During questioning, Republican senators had questioned Jackson about below-guidelines sentences that she imposed in child pornography cases. They also claimed that critical race theory was being taught in books available at a school on which she was on the board of trustees.

After Republican Sen. Josh Hawley of Missouri raised questions about the child pornography sentences Tuesday, the White House called the questioning an “embarrassing QAnon-signaling smear.” The reference was to the group’s false claims about an international child-abuse ring.

Durbin apparently referred to the QAnon claims as he addressed Jackson.

“Yesterday, your nomination turned out to be the testing ground for conspiracy theories and culture-war theories,” Durbin said. “The more bizarre the charges against you and your family, the more the social media scoreboard lit up yesterday. I am sorry that we have to go through this.”