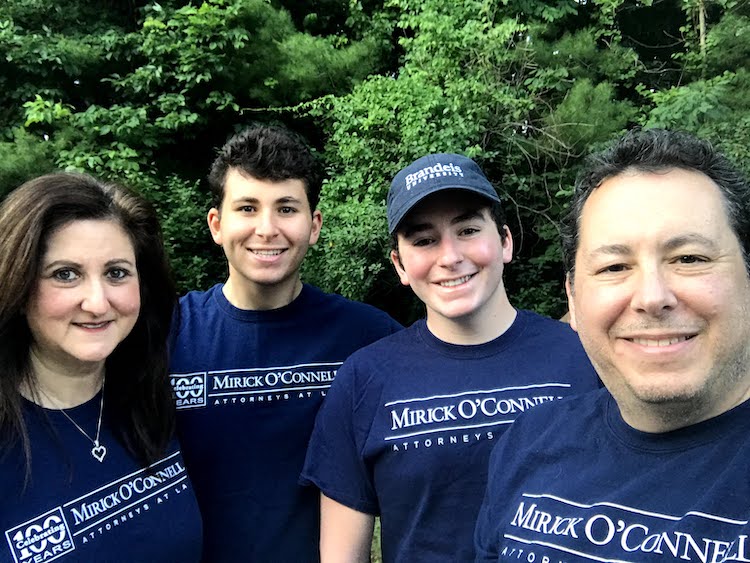 ABA member and lawyer Elizabeth Greene with her husband and two sons at the 2020 Remote Central MA Heart & Stroke Walk.

Elizabeth Greene had been practicing with Mirick, O’Connell, DeMallie & Lougee in Worcester, Massachusetts, for two years in 1997 when she heard about a new opportunity.

She received an email from a partner who volunteered with the American Heart Association but was moving on to other projects. He told her the organization wanted to rekindle its presence in central Massachusetts and needed someone’s help.

“It came at an interesting time for me, because I was busy practicing law, married and everything seemed right, and yet something was missing for me,” Greene says. “When that email came, I realized what that missing piece was—it was my volunteer involvement.”

Greene helped create the organization’s Central Massachusetts board of directors and served as its chair several times. She continues to serve on the board and several of its subcommittees, and chairs its Advocacy Committee. She also serves on the Central Massachusetts Heart and Stroke Ball’s executive committee.

She has always engaged her firm in the AHA/ASA and co-chairs its team for the Central Massachusetts Heart & Stroke Walk, another event she helped redevelop in the community. The firm has a Boston Lawyers Have Heart 5K team and has participated in every National Wear Red Day, an event that raises awareness about cardiovascular disease during American Heart Month in February. 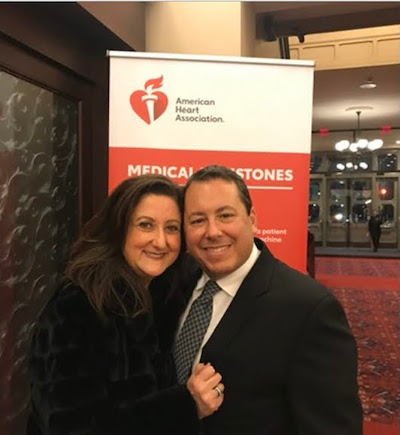 Elizabeth Greene and her husband at the February 2020 Central MA Heart & Stroke Ball.

Promoting health and wellness has played a significant role in Greene’s life.

The oldest of five, she grew up in New Jersey and lived with both of her grandmothers. One of them suffered from strokes, and the other, who was an attorney and practiced with her grandfather, had been diagnosed with Alzheimer’s disease.

Her father, an orthopedic surgeon, inspired her to first pursue medicine and then the law. He developed amyotrophic lateral sclerosis, more commonly known as Lou Gehrig’s disease, and died at age 61, but she believes he might have also gone to law school.

“He encouraged all of us to have a profession and in his view, being a doctor or lawyer were professions that could give you independence and an opportunity to have a positive impact on people as well as impact your community with charitable work, as he and my mom did,” she says.

Greene went to Brandeis University, where she majored in cognitive science and linguistics to better understand a neurological condition that affected her youngest brother. After graduating from the Boston University School of Law in 1992, she pursued a career in health law.

She practiced with a small litigation firm in Boston for a few years before joining Mirick O’Connell. Now a partner in the firm’s health law and litigation groups, she represents health care providers and systems in medical malpractice cases and licensure matters and advises on medical staff issues.

A longtime member of the ABA, Greene serves as chair of the Health Law Section’s Physician Issues Interest Group, which she says aligns with her expanding role in structuring contracts and business arrangements to meet statutory and regulatory requirements.

Kathleen DeBruhl, a health law attorney in New Orleans, met Greene at the Health Law Section’s Physicians Legal Issues: Healthcare Delivery & Innovation Conference in Chicago several years ago. The pair is co-chairing this year’s conference, which is scheduled for September.

“We met very serendipitously at the conference, which is such an ABA story,” DeBruhl says. “Elizabeth always brings passion and diligence to whatever she does. She’s fun, she’s funny, she’s engaging and that always makes everything more pleasant when you’re doing volunteer work.”

Greene contends that her experience as an attorney also aids her work with the AHA/ASA. In a room full of volunteers, she helps ensure everyone’s voices are heard. She calls on her knowledge of health care to advocate for legislative changes and consider how they might affect everyone involved.

“When we talk to parents who have lost children to sudden cardiac arrest or who have themselves been impacted by stroke, there are things we can do through legislation to help improve care, but we need to be mindful that we have different constituencies that are all interested in the same issue,” she says. 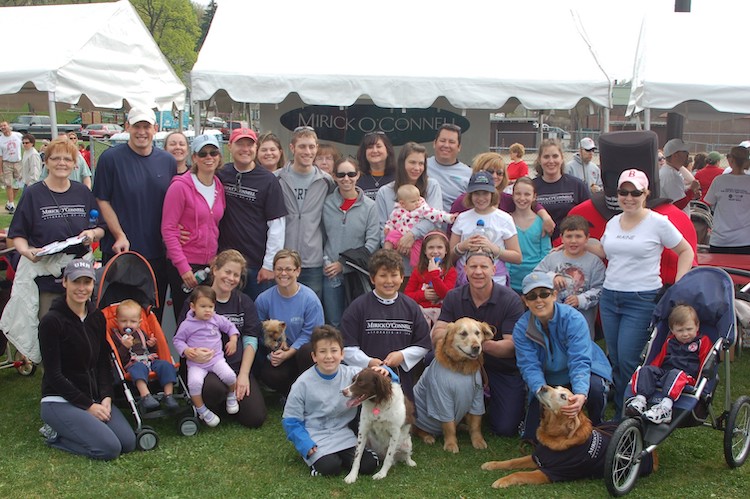 Elizabeth Greene (back row, center) at the 2009 Central MA Heart Walk with the Mirick O’Connell Team.

Greene often tells people interested in the AHA/ASA they should join her at one of her Advocacy Committee meetings because it’s “like plugging into a giant charging battery.”

“Because of the energy from our volunteers,” she explains. “I am so inspired by the volunteers who come forward to share their stories so others do not go through the heart and stroke experiences that they have and help push forward legislation that impacts our entire community.”

Greene has been involved in advocating for the AHA/ASA’s legislative policies both on Beacon Hill and in Washington, D.C. In Massachusetts, she helped pass laws that require automated external defibrillators, or AEDs, in health clubs and schools. She also helped her state raise its smoking age to 21 and become the first in the country to ban all flavored tobacco products.

Greene is now working on legislation related to stroke systems of care, which could ensure patients in Massachusetts who suffer a stroke receive care at an appropriate hospital in a timely manner. And, on a local level, she and other volunteers are encouraging schools to make CPR a graduation requirement for students.

“We know that most cardiac arrests happen at home or close to home,” Greene says. “If we teach our youngsters how to do hands-only CPR, how to activate and operate the chain of survival, of calling 911, doing chest compressions, we are creating a generation of people who have the opportunity to save the lives of the people that they love.”

Allyson Perron Drag, the government relations director for the AHA/ASA in Massachusetts, says Greene is just as passionate about the organization’s mission today as she was when she met her 15 years ago. In addition to increasing its presence in her community and demonstrating how advocacy makes a difference, she has inspired others from the legal community to become volunteers.

“She has balanced it all really well,” Drag says. “She’s a successful lawyer, she’s mom of two amazing boys and she has still found time to give back to our community, and so much time to us.”