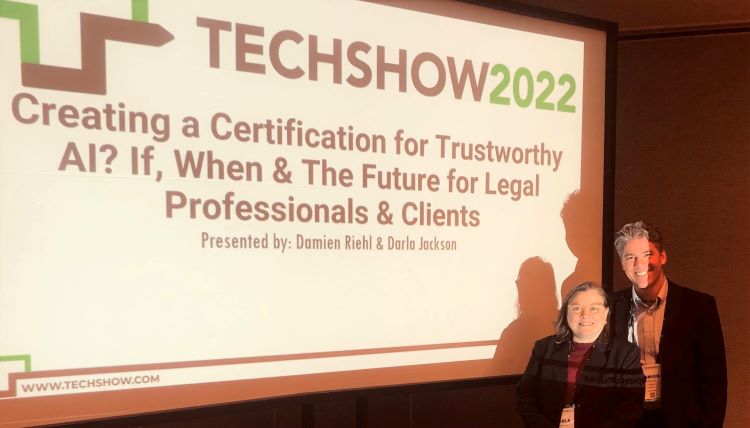 As law firms and attorneys rely on artificial intelligence to analyze data, handle client queries and check and review documents and contracts, they have to educate themselves about the tech’s liability risks.

That was a key takeaway from an ABA Techshow 2022 panel hosted Friday by technology lawyer and Fastcase executive Damien Riehl and co-presenter Darla W. Jackson, a librarian at the University of Oklahoma College of Law.

The panel was titled “Creating a Certification for Trustworthy AI? If, When & The Future for Legal Professionals & Clients.”

Riehl and Jackson focused on one of the hot topics surrounding AI: how use of the technology can lead to biased outcomes.

Riehl said biases had slipped into an AI tool that judges were using to determine the flight risk of a defendant requesting bail because the tool relied on ZIP codes from Black communities.

Follow along with the ABA Journal’s coverage of the ABA Techshow 2022 here.

“The output of that was somebody who was either given bail or not getting bail. That’s a bad output. We need to regulate that because that’s people’s liberties at stake. You can argue as to whether it was biased or not, but the output was really important,” Riehl said.

The panel also discussed some of the AI certification initiatives that have emerged as firms and lawyers seek to address liability and privacy concerns arising from using tools that researchers have shown can sometimes use algorithms that discriminate against minorities and women.

Jackson said AI certification initiatives have offered hope to lawyers wishing to make up for a lack of knowledge. In 2021, the ABA Journal reported on an initiative to create a global certification mark for trustworthy AI systems.

“We know there are a lot of potential risks and issues to address with AI that are new on the horizon,” Hadfield told the Journal then. “One of the things we are hoping for with a global certification mark is both to develop some of the techniques for evaluating AI systems and also provide an independent third-party verification process.”

But Jackson suggested that certification alone would not be enough. Lawyers would still have to educate themselves through CLE and bar association programs, she said.

Thirty-nine states have adopted a duty of competency so that lawyers must know the risks and benefits of technology. And yet in a 2021 ABA technology survey, 33% said they didn’t know enough about AI to answer the question about their firm’s use of the tech, Jackson noted in her presentation.

“You have to know the risks and the benefits of using the technology,” Jackson said. “As an attorney, if you don’t understand what AI is and its risks and benefits, … how can you communicate [those risks] with a client?”