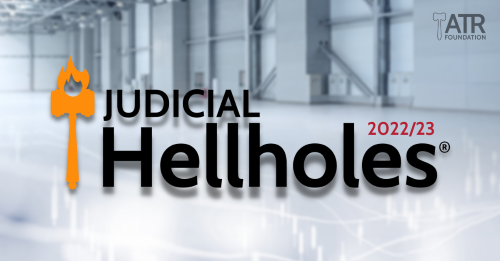 Georgia has climbed to the top spot in a ranking of “judicial hellholes” by the American Tort Reform Foundation.

A $1.7 billion verdict against the Ford Motor Co. was among several “nuclear verdicts”—defined as verdicts that are greater than $10 million—in the state in the past year, according to a press release, an executive summary and a report.

The Ford Motor Co. is appealing the verdict issued in a wrongful death suit filed by the family of Melvin and Voncile Hill, who were killed in a rollover wreck, the Associated Press reported in August. The suit blamed the deaths on dangerously defective roofs on trucks.

A sanctions order against Ford required jurors to assume that roofs on 1999-2016 Super Duty trucks were dangerously designed and defectively weak, and that Ford’s actions in selling the trucks amounted to a wanton disregard for life, according to the foundation.

One reason for the high verdicts is a Georgia statute that allows plaintiffs lawyers to use “anchoring” tactics, according to the foundation’s explanation for Georgia’s No. 1 rank. The foundation describes anchoring as “a tactic that lawyers use in order to place an extremely high amount into jurors’ minds to start as a base dollar amount for a pain and suffering award.”

Some states have laws that prevent anchoring. Georgia, on the other hand, is one of the few with a specific law that allows it.

The foundation also points to a Georgia Supreme Court decision that kept in place a “seat belt gag rule” that bars evidence of accident plaintiffs’ failure to wear seat belts. The June decision, which answered a federal judge’s certified question, said the issue was not yet ripe for review at the early stage in the litigation, the National Law Journal reported at the time.

The foundation also criticized the Georgia Supreme Court for failing to adopt what is known as the apex doctrine to prevent unnecessary depositions of corporate executives. The doctrine applies a special test to determine whether corporate executives should be deposed, Reuters reported in June coverage of the ruling.

According to the foundation, the doctrine allows executives to be shielded from depositions when the executive lacks unique, first-hand knowledge of the facts and other less intrusive means of discovery have not been exhausted.

The foundation named eight judicial hellholes in which “lawsuit abuse and misuse of the court system are the norm,” according to the press release. They are:

2. The Pennsylvania Supreme Court and the Philadelphia Court of Common Pleas