Sen. Graham questions Jackson about her advocacy for Guantanamo detainees 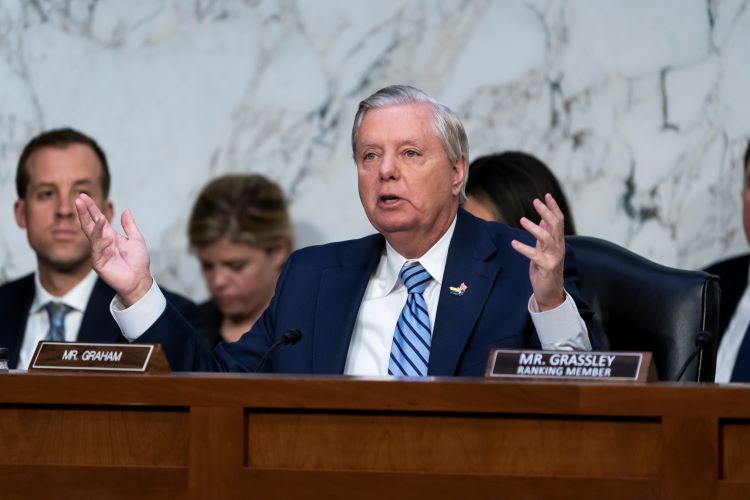 Republican Sen. Lindsey Graham of South Carolina asked U.S. Supreme Court Judge nominee Ketanji Brown Jackson on Tuesday whether she was bothered “as an American” by the release of Guantanamo detainees.

Graham said he understood Jackson’s representation of Guantanamo detainees as an appellate public defender. But he questioned her decision to file an amicus brief taking their side while working as a private attorney at Morrison & Foerster.

Graham questioned Jackson during the second day of her Supreme Court confirmation hearing before the Senate Judiciary Committee.

Graham wrote two amicus briefs regarding detainees in cases before the Supreme Court, according to prior coverage by the Washington Post. One, written for the Cato Institute, a libertarian group, and the Rutherford Institute, a conservative group, argued against the indefinite detention of U.S. residents captured on U.S. soil. The other, written on behalf of a group of retired federal judges, argued that Guantanamo detainees have a right to challenge their detention in federal court.

Graham asked Jackson about the brief for federal judges. Jackson said she worked on the brief at the request of a partner. She also said that, when you are an attorney working for clients, you represent their positions in court, whether they pay you or not.

Graham said Jackson had argued that the detainees had to be tried or released.

“If you tried to do this in World War II, they’d run you out of town,” Graham declared.

Graham cited statistics showing that 229 out of 729 released Guantanamo detainees have gone back to the fight. That prompted Senate Judiciary Committee Chairman Dick Durbin, a Democrat of Illinois, to comment that more recent statistics on detainees released since 2009 cite a lower recidivism rate of 5%.

Jackson addressed her representation of Guantanamo detainees as a public defender under earlier questioning Tuesday by Durbin.

Jackson said Sept. 11, 2001, was “a tragic attack,” but it was still important not to “let the terrorists win by changing who we were fundamentally.”

One of our values is that people accused by the government are entitled to representation, she said.

Cases involving Guantanamo detainees began coming in to her office when she was a lawyer there.

“Public defenders don’t get to pick their clients,” she observed.