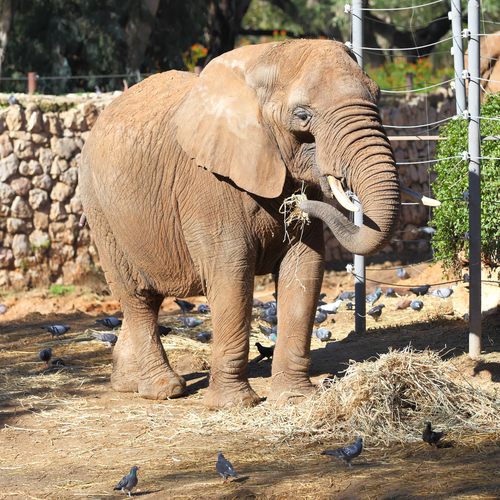 An elephant in a zoo. Photo from Shutterstock.

New York’s top court ruled 5-2 Tuesday that an elephant named Happy at the Bronx Zoo in New York City can’t be freed from detention through a writ of habeas corpus.

The New York Court of Appeals said a writ of habeas corpus is intended to protect the right of human beings to be free from unlawful confinement.

“It has no applicability to Happy, a nonhuman animal who is not a ‘person’ subjected to illegal detention,” the court said in its June 14 opinion.

The Nonhuman Rights Project had sought Happy’s release to an elephant sanctuary. The group has filed numerous lawsuits seeking the release of elephants and chimpanzees in New York and other states but has not been successful, the court noted.

Happy has spent 45 years at the Bronx Zoo. She lives alone after two companions were euthanized, one for injuries suffered in an altercation with resident elephants and the other for an illness. Another elephant lives at the zoo, but it is housed separately from Happy “due to their hostile relationship,” the court said.

The zoo’s chief veterinarian, however, said in an affidavit that Happy is healthy and well adapted to her surroundings, and moving her would cause substantial stress.

The top New York court acknowledged that elephants are intelligent but said that doesn’t make them a legal person with a right to liberty safeguarded by the writ of habeas corpus.

“A determination that Happy, an elephant, may invoke habeas corpus to challenge her confinement at the Bronx Zoo—a confinement both authorized and, by all indications, compliant with state and federal statutory law and regulations—would have an enormous destabilizing impact on modern society,” the New York Court of Appeals said in an opinion by Chief Judge Janet DiFiore.

Granting legal personhood to a nonhuman animal would have significant implications for the interactions of humans and animals, affecting the agricultural industry, property rights and medical research efforts, the court said.

“Indeed, followed to its logical conclusion, such a determination would call into question the very premises underlying pet ownership, the use of service animals, and the enlistment of animals in other forms of work.”

The court said the case “has garnered extraordinary interest.”

“Though beyond the purview of the courts, we appreciate that the desire and ability of our community to engage in a continuing dialogue regarding the protection and welfare of nonhuman animals is an essential characteristic of our humanity. Such dialogue, however, should be directed to the legislature,” the court said.

Hat tip to Bloomberg Law, Reuters, the Associated Press, the Legal Profession Blog and the Volokh Conspiracy, which covered or noted the opinion.

ABAJournal.com: “Judge takes first step to decide whether Happy the elephant should be released from Bronx Zoo”