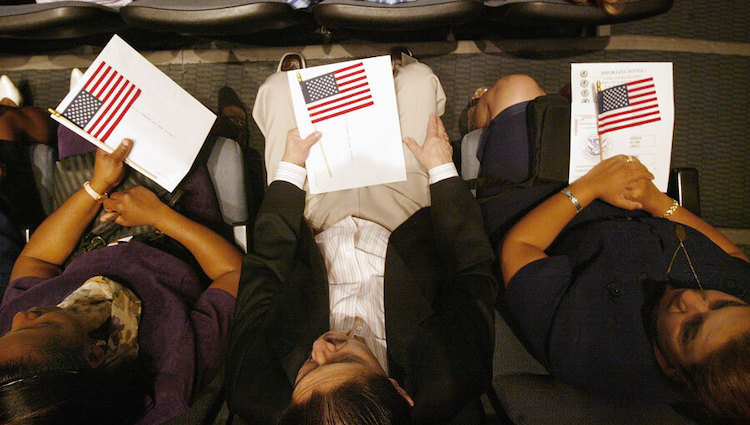 Three people hold U.S. flags as they wait to be sworn in as American citizens at a naturalization ceremony on the Intrepid Sea-Air-Space Museum in July 2004 in New York City. Photo by Spencer Platt/Getty Images.

As Ana Mclean looked for a path to citizenship, she struggled to scrape together the fee to apply at U.S. Citizenship and Immigration Services.

Mclean, who emigrated from Costa Rica in 2005, says she earns about $24,000 per year as a home caregiver for the elderly. The 60-year-old received a permanent resident card in 2014 and says she wants to become an American citizen so she can vote.

This year, she paid the naturalization application filing fee of $640 and the additional $85 for biometric services using a loan from the Citizenship Loan Program. The initiative offers interest-free loans to permanent residents who live in one of New York City’s five boroughs, Westchester or Long Island.

Maribel Maria works for the group New York Lawyers for the Public Interest, which has partnered with the Hebrew Free Loan Society and Catholic Migration Services to offer the loans.

The program was created in 2020 to help immigrants overcome financial barriers preventing them from becoming citizens, says Maria, who helps people in underserved communities connect with pro bono counsel.

“The goal of the program is ultimately to put the citizenship process in reach for lower-income New Yorkers without regard to their ability to afford the application fees,” Maria wrote in an email.

Jose M. Leon, a supervising attorney with Catholic Migration Services, says most of his clients are low income. Whenever he gets a new client, he determines if they are eligible for a fee waiver. If they are not, he tells them about the loan program.

“I don’t think these people would be able to become U.S. citizens unless a program like this existed,” Leon says.

Mclean was not eligible for a fee waiver from USCIS because her household income is 150% above the federal poverty level, and she does not receive public benefits, according to Samantha Pascal, naturalization coordinator for Catholic Migration Services. 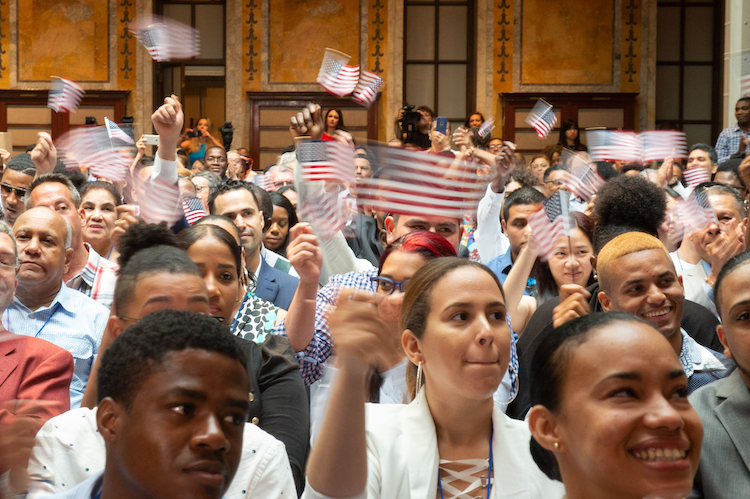 The U.S. Citizenship and Immigration Services welcomes 200 new citizens from 50 countries during a ceremony in honor of Independence Day at the New York Public Library in July 2018 in New York. Photo by Bryan R. Smith/AFP via Getty Images.

Maria says the program was created in response to the Trump administration’s proposed changes to the government’s fee schedule. Introduced in November 2019, the new rules would have increased the application fee for a paper filing by more than 83% to $1,170 and made it harder for low-income people to apply for a fee waiver, according to the Immigrant Legal Resource Center and other groups that sued to block the rule change.

Just days before the rule was scheduled to go into effect on Oct. 2, 2020, U.S. District Judge Jeffrey S. White granted the plaintiffs a preliminary injunction at the Northern District of California court.

USCIS said that revenue from fees made up more than 96% of the agency’s budget and that it depended on the revenue to adjudicate applications and petitions.

“This proposed adjustment in fees would ensure more applicants cover the true cost of their applications and minimizes subsidies from an already over-extended system,” Ken Cuccinelli, then-acting director of the agency, said in November 2019.

Even so, fees are still a barrier, Maria says. The Citizenship Loan Program offers interest-free loans to permanent residents like Mclean and has awarded loans to 13 recipients.

Applicants can repay the loan in equal installments over 20 months, with no interest or fees, according to the program’s website, or spread the loan over a longer period based on their income.

For applicants in a one-person household, the income limit is $91,540. The income limit in a home with four people is $130,755. The income limits were chosen using the Department of Housing and Urban Development’s moderate-income guidelines, according to Kim Kaplan, deputy director of Hebrew Free Loan Society.