'Nothing could be further from the truth,' Jackson says in response to Sen. Hawley's sentencing accusations 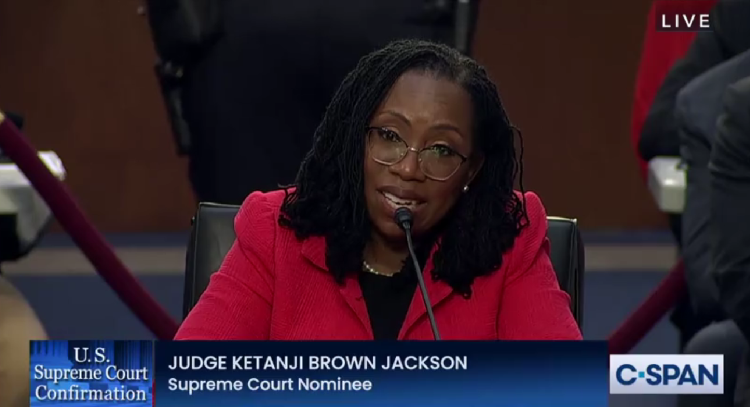 Updated: U.S. Supreme Court nominee Judge Ketanji Brown Jackson on Tuesday pushed back against accusations that she had a habit of letting child pornography offenders off the hook by giving them lenient sentences for their crimes.

Jackson first addressed the issue in response to questions by Senate Judiciary Committee Chairman Dick Durbin, a Democrat from Illinois, during the second day of her confirmation hearing.

Durbin asked Jackson how she felt about comments by Republican Sen. Josh Hawley of Missouri, who has outlined seven cases in which Jackson’s sentence in child pornography cases was below the range suggested by federal sentencing guidelines. Hawley has suggested that Jackson’s sentencing record is endangering children.

Jackson said she takes the cases for the serious matters that they are.

“As a mother and a judge who has had to deal with these cases, I was thinking that nothing could be further from the truth,” Jackson said of Hawley’s conclusions. “These are some of the most difficult cases that a judge has to deal with because we are talking about pictures of sex abuse of children, we’re talking about graphic descriptions that judges have to read and consider.”

Jackson said she is following the congressional statute when imposing sentences in child pornography cases that don’t involve the production of pornographic material.

One issue is that the sentencing statute was written before the internet age, Jackson said. The statute bases sentences on the quantity of pornographic material that a defendant receives in the mail. That made sense at the time, but now it is leading to extreme sentencing disparities because it is so easy to get volumes of this kind of material online, Jackson said. As a result, courts are adjusting their sentences to adjust for changed circumstances since enactment of the statute.

Jackson said she imposes additional constraints on defendants in sentencing. Child pornography defendants are getting up to 40 years of supervision, and they are restricted in their use of computers, she said.

“I impose those constraints because I understand how significant, how damaging, how horrible this crime is,” she said.

Jackson also said she tells defendants during sentencing about victims’ statements that she has received as a judge. She tells defendants about adults who were former child sex abuse victims who can’t lead a normal adult life because of the abuse. They go into prostitution; they use drugs because they are trying to deal with the hurt, she said.

She also tells defendants about one woman abused as a child who is afraid to leave her house because she thinks people will recognize her from photos on the internet.

“I tell that story to every child pornography defendant as party of my sentencing, so they understand what they have done,” Jackson said.

Durbin cited some statistics to show that Jackson’s sentences are not outside the mainstream.

Jackson also addressed her approach to judging in response to Durbin’s questions.

Jackson said she has developed a methodology over the course of almost a decade to ensure that she is ruling impartially and adhering to the limits on her judicial authority.

“I am acutely aware that as a judge in our system, I have limited power, and I am trying in every case to stay in my lane,” Jackson said.

She follows a three-step system.

First, she ensures that she is proceeding from a position of neutrality. “I am clearing my mind of any preconceived notions of how the case might come out, setting aside my personal views,” she said.

Second, she reviews the appropriate inputs for the case, including the parties’ arguments, the written briefs and the factual record. “I’m evaluating all of the facts from various perspectives,” she said.

The third step is interpretation and application of the law to the facts of the case. “This is where I’m really observing the constraints on my judicial authority,” she said.

As a threshold matter, she looks at whether she has jurisdiction in the case. When she looks at a statute or constitutional provision, she looks to the text, she said. “Adherence to text is a restraint on my authority,” she said.

She tries to figure out what the words mean by the people who wrote them, looking to original documents, public meetings and history and practice when the document was created. When there is a statute, she looks to the purpose of a policy.

“I’m also looking at precedent, which is another constraint on judicial authority. I’m looking at prior cases and looking at what justices have said,” she said.

As a lower court judge, Jackson said, she is bound by precedent. In the Supreme Court, there is stare decisis that supports precedent.

Jackson tells Hawley that sentencing ‘is not a numbers game’

In the afternoon of the second day of hearings, Hawley asked Jackson about a child pornography case in which she gave the defendant a three-month sentence.

The case, United States v. Hawkins, is one of seven cases highlighted by Hawley in which Jackson issued child-pornography sentences that were below the range suggested by federal sentencing guidelines.

In five of the cases, however, Jackson imposed sentences that were the same as or greater than recommendations by the U.S. Probation Office, according to White House information.

Hawkins involved an 18-year-old defendant who possessed videos depicting sexual acts involving children who were as young as 8, 11 and 12 years old, Hawley said. One video showed an 11-year-old child being raped by an adult male, Hawley said.

The prosecutor in the case had recommended a two-year sentence, while the sentencing guidelines recommended a sentence of 97 to 121 months in prison. After a break during the hearing, senators said the White House had released the probation report in the Hawkins case. The U.S. Probation Office had recommended an 18-month sentence, according to Republican U.S. Sen. Ted Cruz of Texas. Several Republican senators complained that the information should have been released earlier.

Hawley said Jackson had said she didn’t believe it was appropriate to increase the penalty based on the number of images possessed by the defendant because they didn’t signal an especially heinous or egregious child pornography offense.

Jackson has previously said in testimony that the sentencing statute is outdated because it based sentences on the quantity of pornographic material possessed by a defendant. At the time of the statute’s enactment, that meant how many images the defendant received in the mail. Now the law is leading to extreme sentencing disparities because it is so easy to get volumes of this kind of material online, Jackson said in her earlier testimony.

Responding to Hawley, Jackson said that all child pornography cases are heinous or egregious. Her recollection of the Hawkins case is that the defendant had just graduated from high school, and some of the materials he was looking at were of older teen victims.

“What a judge has to do is determine how to sentence defendants proportionately consistent with the elements that the statutes include,” Jackson said.

The age and the circumstances of the defendant are relevant, Jackson told Hawley. “Sentencing is a discretionary act of a judge, but it’s not a numbers game,” she said.

Last updated at 6:01 p.m. to include Hawley’s afternoon questions, Jackson’s responses and information about the probation report.