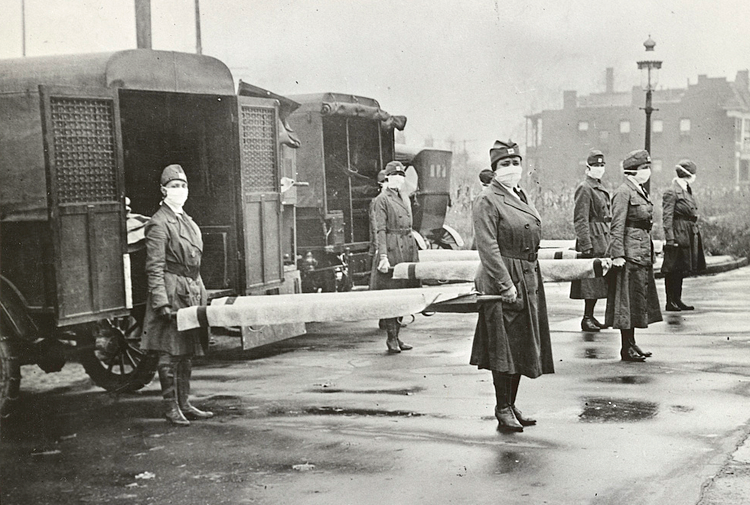 The American Red Cross Motor Corps on duty during the influenza epidemic in October 1918. Photo from the Library of Congress / American National Red Cross photograph collection.

When the U.S. Supreme Court announced this week that its March sitting of oral arguments would be postponed “in keeping with public health precautions recommended in response to COVID-19,” the statement included some historical references for support—going back as far as 227 years ago.

“The Court’s postponement of argument sessions in light of public health concerns is not unprecedented,” the statement said. “The Court postponed scheduled arguments for October 1918 in response to the Spanish flu epidemic. The Court also shortened its argument calendars in August 1793 and August 1798 in response to yellow fever outbreaks.”

During the Spanish flu epidemic, which ravaged the nation’s capital, the court postponed arguments at the start of its 1918-19 term by about a month. More than 33,000 Washington residents fell ill between Oct. 1, 1918 and Feb. 1, 1919, with 2,895 dying from the disease, according to the Influenza Encyclopedia of the University of Michigan Center for the History of Medicine.

“We have been adjourned on account of the epidemic as it was not thought right to require lawyers to come, often across the continent, to a crowded and infected spot,” Justice Oliver Wendell Holmes wrote to Sir Edward Pollock, a British jurist with whom Holmes was a lifelong correspondent.

The Spanish flu epidemic took 675,000 lives throughout the US and 50 million worldwide, according to the Centers for Disease Control.

In the high court’s earliest years, yellow fever was more than once a hazard in Philadelphia, then the nation’s capital.

“There being some appearances of the Yellow Fever in Waterstreet, between the Bridge and Walnut Street, the lawyers agreed to continue most of the Causes, and our Court broke up yesterday,” Justice James Iredell wrote on Aug. 8, 1798, to his wife, Hannah.

Some scholars were not surprised that the tradition-bound Supreme Court looked to history to support its decision to postpone an oral argument session.

“Lawyers are wedded to precedent,” says Natalie Wexler, a Washington author who helped compile an authoritative history of the earliest years of the high court. “They are always looking for precedent that logically would carry over to things like suspending the Supreme Court’s oral arguments when disease is around.”

The Supreme Court on March 16 postponed 11 hours of argument covering 14 cases (three are consolidated with others). The arguments were scheduled to run for three days a week on March 23-25 and March 30-April 1.

In a term already filled with blockbuster cases, the March session included another big one: two hours of arguments over efforts by congressional committees and a New York City prosecutor to subpoena President Donald J. Trump’s financial records.

The session was also to include arguments in a $8 billion computer-code copyright fight between Google LLC and Oracle America Inc.; a battle over whether a state may limit the membership of its highest courts to members of the two major political parties; and a significant case about whether employees of religious schools are covered by anti-discrimination laws.

“The court will examine the options for rescheduling those cases in due course in light of the developing circumstances,” Kathleen Arberg, the Supreme Court’s public information officer, said in the statement.

The postponement was largely accepted with relief in light of the sharp increase of coronavirus infections in the United States and the dramatically escalating responses in the last two weeks, such as social distancing. 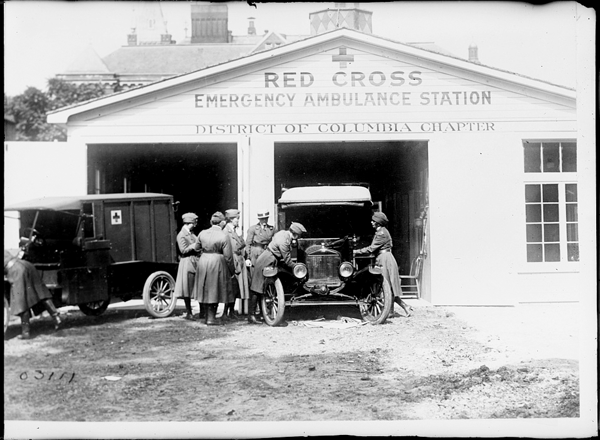 The Red Cross Emergency Ambulance station of the District of Columbia Chapter worked overtime during the influenza epidemic of the autumn of 1918. Photo from the Library of Congress / American National Red Cross photograph collection.

“Obviously, it is disappointing and inconvenient for the argument to be delayed, but public health comes first,” says Michael W. McConnell, a Stanford University law professor and senior of counsel to Wilson Sonsini, who was to argue March 25 in Carney v. Adams, representing Delaware in defending its judicial selection system.

“I am in California, where my county has issued a ‘shelter-in-place’ order,” adds McConnell. “I can’t say I was looking forward to a trans-continental plane ride in the midst of this virus.”

Jennifer A. Lipski, a Woodland Hills, California, lawyer whose case was scheduled for oral argument before the court on April 1, was also grateful. She is representing a former teacher and the estate of another challenging employment decisions by two Roman Catholic elementary schools in two consolidated cases.

“I’m relieved that my clients, co-counsel, colleagues and I have a little more than two weeks’ notice of the postponement, rather than another week (or more) of uncertainty about whether our oral argument would remain on calendar as originally scheduled,” she said via email.

Lipski also noted that carrying on as normal might have put the justices, as well as court staff and others, at greater risk. Justice Ruth Bader Ginsburg turned 87 this month, while Justice Stephen G. Breyer is 81 and three other members of the court are 65 or older: Chief Justice John G. Roberts Jr. and Justices Clarence Thomas and Samuel A. Alito Jr.

Stephen I. Vladeck, a University of Texas-Austin law professor who was scheduled to argue March 23 in a case about rape prosecutions under the Uniform Code of Military Justice, said on Twitter that the postponement was “an essential accommodation not only for the Court’s staff, but for the advocates—especially those (like me) who would’ve had to travel across the country to get there.”

Vladeck had earlier floated the idea of holding the arguments without the general public, allowing the arguing counsel and other essential personnel, which perhaps might have included reporters spread out into the courtroom.

With the coronavirus response now requiring widespread social distancing, some observers have even raised the question of whether oral argument might be temporarily scrapped, with the justices deciding its remaining merits cases this term based solely on written filings.

The court did indicate it would proceed with its private conference on March 19, possibly with some justices participating by telephone. The court will issue orders from that conference electronically on March 23. And while the court has a long tradition of announcing opinions in argued cases from the bench, the court’s statement did not rule out the issuance of opinions during the postponement of public sessions.

One certainty is that the Supreme Court relies on its history, and in the past outbreaks of disease cited by the court, oral arguments eventually resumed.

In the 1918 Spanish flu epidemic, Washington was hit hard just as the high court was nearing the beginning of its new term. “Epidemic in District Continues to Increase” said a headline in the Washington Herald on Oct. 7, the first Monday in October when the court’s new term was beginning.

“Yesterday, the galleries of the Senate were closed to visitors for the first time in history to check an epidemic,” the Herald said in its Oct. 8 edition.

Thomas C. Goldstein, the publisher of ScotusBlog and a practitioner before the court, wrote an article on his site detailing how the court met on Oct. 7 to open the term, but soon began pushing back oral arguments a week at a time. The Supreme Court was still in its old chamber in the U.S. Capitol, and was likely following the practice of the congressional galleries, he wrote.

By late October, influenza cases began to decline in Washington. “The United States Supreme Court will begin hearing arguments on pending cases Monday, after a recess since October 8, due to influenza,” The Washington Post reported.

The court took up arguments on Nov. 4, and appears to have added some argument days in mid-November to help make up for the postponed October cases, Goldstein noted. 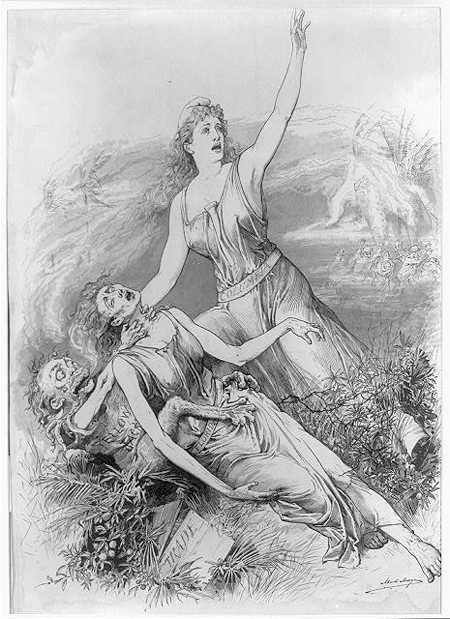 A political cartoon drawn by Matt Morgan in 1873 represents a yellow fever epidemic in that year, with the ghastly yellow fever gripping Florida while the District of Columbia calls for aid. Image from the Library of Congress.

For the precedent of yellow fever outbreaks on the early Supreme Court, it appears likely that court officials consulted The Documentary History of the United States Supreme Court, 1789-1800, an eight-volume work that took researchers some 30 years to complete beginning in 1977.

The original documents cited in the series include several references to yellow fever’s impact on the court. Alexander J. Dallas, the unofficial reporter of the court’s proceedings, observed the following for the August 1793 term: “The Malignant Fever, which during this year, raged in the City of Philadelphia, dispersed the great body of its inhabitants, and proved fatal to thousands, interrupted, likewise, the business of the Courts; and I cannot trace that any important cause was agitated in the present Term.”

Wexler, who was an editor of the documentary history series for 10 years, says the 1793 yellow fever epidemic in Philadelphia was the worst. “This was happening almost every August and September and they didn’t know that the disease was being transmitted by mosquitoes,” she says. “There were a lot of crackpot theories about why it was happening.”

The six justices of the Supreme Court also then rode circuit, hearing cases around the country. In October 1793, a Boston newspaper reported that Justice John Blair “of the supreme Court of the United States, arrived in this town, from the southward, after an examination at the entrance by the health-officer.” The governor of Massachusetts had ordered public officials to examine all travelers, and baggage, “coming from Philadelphia, or any other infected Place.”

The 1798 yellow fever outbreak claimed the life of one litigant who, at least briefly, had a case before the Supreme Court. Benjamin Franklin Bache, the grandson of Benjamin Franklin and a pugnacious Philadelphia newspaper publisher, was arrested and charged under the common law with libel of President John Adams and his Federalist Party administration in Bache’s newspaper, the Aurora.

While Bache was awaiting trial, his lawyers, who included Dallas, asked the Supreme Court for a “writ of prohibition” that would have stayed the lower-court proceedings. But with reports that yellow fever had returned to Philadelphia that August, the court postponed its proceedings one day after the writ was filed. In September, Bache contracted yellow fever and died.

Wexler, who now writes about education policy but has published novels that include one about early wives of the Supreme Court justices, notes that the yellow fever epidemics tended to subside as winter’s chill eradicated the mosquito population.

After the 1793 outbreak, the Supreme Court returned for its next regular term in February 1794, when Wexler said the minutes suggest the justices took on extra work to make up for time lost the previous fall.

“They rolled up their sleeves and got back to business,” she says.