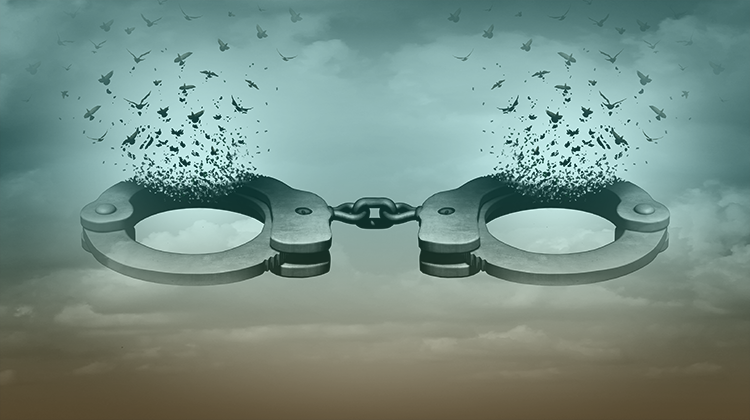 The House of Delegates took aim at mass incarceration in two separate resolutions at the ABA Annual Meeting in Chicago on Monday.

Resolution 604 adopts the ABA Ten Principles on Reducing Mass Incarceration and urges all legislative and governmental bodies to implement policies consistent with these guidelines. According to the Working Group on Building Public Trust in the American Justice System, which sponsored the resolution, the principles build on existing ABA policies related to sentencing, pretrial detention, and court fines and fees; and they outline crucial steps that jurisdictions can take to fully reform their criminal legal systems.

In moving the resolution, Robert Weiner, the chair of the working group, pointed out that the United States has less than 5% of the world’s population but nearly 25% of its incarcerated individuals.

Weiner added that those in U.S. prisons and jails are disproportionately people of color, citing statistics showing that one of every three Black men born in 2021 can expect to be incarcerated at some point in their lives. He noted that this disrupts families, perpetuates poverty, leads to discrimination in hiring and hinders upward mobility.

“The current system of mass incarceration is costly, ineffective, unfair, racially discriminatory, socially destructive and legally infirm,” Weiner said. “It is time we tackle this problem.”

The working group includes the following in its 10 principles:

• Limit the use of pretrial detention.

• Increase the use of diversion programs and other alternatives to prosecution and incarceration.

• Expand the use of probation, community release and other alternatives to incarceration, and create the fewest restrictions possible while promoting rehabilitation and protecting public safety.

• End incarceration for the failure to pay fines or fees without first holding an ability-to-pay hearing and finding that a failure to pay was willful.

• Broaden opportunities for incarcerated individuals to reduce their sentences for positive behavior or completing educational, training or rehabilitative programs.

• Evaluate the effectiveness of prosecutors based on their impact on public safety and not their number of convictions.

• Evaluate the effectiveness of probation and parole officers based on their success in helping probationers and parolees and not their revocation rates.

Mark Schickman, a Section of Civil Rights and Social Justice delegate to the House of Delegates and a native of California, spoke in favor of the resolution. He mentioned the city of San Francisco, which is known as one of the most liberal cities in the country but recently recalled progressive District Attorney Chesa Boudin over concerns about rising crime rates.

“We got into a situation where our communities want us to do something about it, and the simple answer is put people in jail,” Schickman said. “But at the same time, America cannot be known as the biggest jailer in the world.

Rhodia Thomas, chair of the National Legal Aid & Defender Association’s board of directors, also spoke in favor of the resolution. She quoted Martin Luther King Jr., who once said, “History will have to record that the greatest tragedy of this period of social transition was not the strident clamor of the bad people, but the appalling silence of the good people.”

“As a society, we can no longer remain silent about the injustice of mass incarceration,” Thomas said.

The report accompanying Resolution 604 cites other significant statistics related to mass incarceration. In 2021, about 2 million people were in jail or prison in the United States, according to data from the Sentencing Project.

Resolution 604, which passed overwhelmingly, is also sponsored by the Standing Committee on Legal Aid and Indigent Defense. The ABA and its relevant committees can now provide guidance to courts, legislatures and advocates “on the best means of ensuring the ending of mass incarceration,” the report says.

Resolution 502 focuses on decades-long sentences that fueled the increase in mass incarceration in the United States.

The Criminal Justice Section submitted the measure, which urges all governments to authorize courts to hear petitions to allow de novo hearings that take a “second look” at the sentences of individuals who have been incarcerated for at least 10 years. It also asks governments to create guidelines for these hearings, ensure individuals are notified of their rights and receive adequate assistance of counsel and implement due process procedures throughout the proceedings.

Wayne McKenzie introduced the resolution, saying that when he considers the nation’s criminal justice system, he usually thinks about “four R’s”: retribution, rehabilitation, reentry and redemption.

“We are really exceptional at the retribution aspect, as indicated that we have 5% of the world’s population and 25% of its prisoners,” said McKenzie, the chair of the Criminal Justice Section. “We are really not good at all on the redemption aspect.”

Nearly 22,000 individuals in federal custody are serving sentences of 20 years or longer and nearly 4,000 more are serving life sentences, according to July data from the Federal Bureau of Prisons that is cited in the resolution’s report. This represents more than 17% of the federal prison population.

In recent years, momentum for more “second look” measures has increased at both the state and federal levels.

Maryland, Washington and California and Washington, D.C., passed laws that permit the review and possible reduction of lengthy prison sentences. Dozens of other states have also introduced bills that could authorize the reevaluation of long sentences.

Additionally, U.S. Sen. Cory Booker, D-N.J., and U.S. Rep. Karen Bass, D-Calif., introduced the Second Look Act of 2019 to allow federal judges to modify the sentences of people who have served more than 10 years in federal prison. It failed to move forward and has not been reintroduced.

Resolution 502, which also passed overwhelmingly, is sponsored by the Section of Civil Rights and Social Justice and Commission on Youth at Risk.