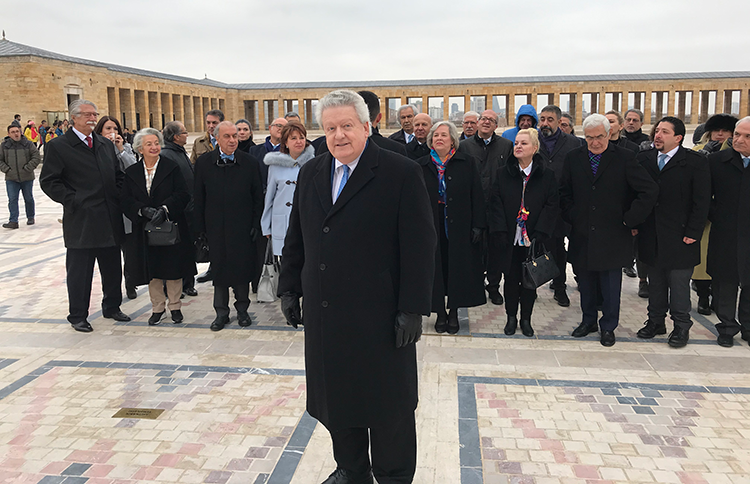 Mark Daniel Maloney (center) led a group of Rotarians in an official visit to the tomb of Mustafa Kemal Atatürk, the founder and first president of the Republic of Turkey, in Ankara, on Dec. 10, 2019.

A series of events led Mark Daniel Maloney from the Midwest to the South, and then all around the world.

He grew up on a farm 5 miles outside of Ridgway, a small town in southern Illinois with fewer than 900 residents. But he says he was never cut out to be a farmer.

Instead, after winning his county’s 4-H public speaking contest and moving on to the state competition at a young age, Maloney realized he wanted to be a lawyer. He studied history at Harvard College, and after graduating in 1976, went to Vanderbilt Law School.

In his second year, Maloney began dating Gay Blackburn, a classmate whose father was an attorney and the former mayor of Decatur, Alabama. He brought her home to meet his family that winter, 10 days before his parents were killed in a tragic car accident. He and Blackburn became engaged six weeks later and were married the month after graduation. The couple decided once Maloney finished his LLM in taxation at New York University in 1980, they would join Blackburn’s father’s firm.

It was in Decatur where Maloney discovered Rotary International, a global network of 1.2 million business and community leaders that focuses on several key initiatives, including promoting peace, supporting education and fighting polio. It was founded in 1905 by Paul Harris, a Chicago attorney who hoped professionals from diverse fields could exchange ideas and give back to their communities.

“It is an opportunity to connect while you are doing good in the world,” says Maloney, a member of Blackburn, Maloney and Schuppert and now the immediate past president of Rotary International. “It is wonderful to be a volunteer, but you go in and you perform the service, and you leave.

“In Rotary, you develop connections not only in your own community but around the world. It gives you something more, and at this time, personal connection is so important.”

Maloney connected to his roots as he built his practice, which focuses on agricultural law, taxation and estate planning. He represents farmers and large landowners in the Midwest and Southeast, assisting in organizing their operations and preparing their plans for filing with the U.S. Department of Agriculture’s Farm Service Agency.

Being a transactional lawyer also gave Maloney the flexibility to pursue interests outside of the office. Since his father-in-law was a member of the local Kiwanis Club, he decided joining the Rotary Club of Decatur would expand their firm’s networking opportunities.

Five years later at the age of 30, Maloney became president of the club. Soon after, he helped host a Nigerian group study exchange team whose leader suggested to Rotary district leaders in northern Alabama that Maloney lead the team that would visit his country.

“And sure enough, a year later, when our daughters were only 2 and 4 years old, I led an exchange team of five young men to Nigeria and we were gone for, as we like to say, 40 days and 40 nights,” he says. “It opened my eyes to what Rotary was in a completely different part of the world.”

Maloney stepped into more leadership roles at a younger age than was typical in the organization, becoming a district governor at 34 in 1989 and a member of the Rotary International Board of Directors at 44 in 1999.

“There is a tendency for people to think you have to move up through the ranks, and some people don’t feel they can take on the responsibility until they are retired,” he says. “That is something I am advocating for, that we have to change that attitude.” 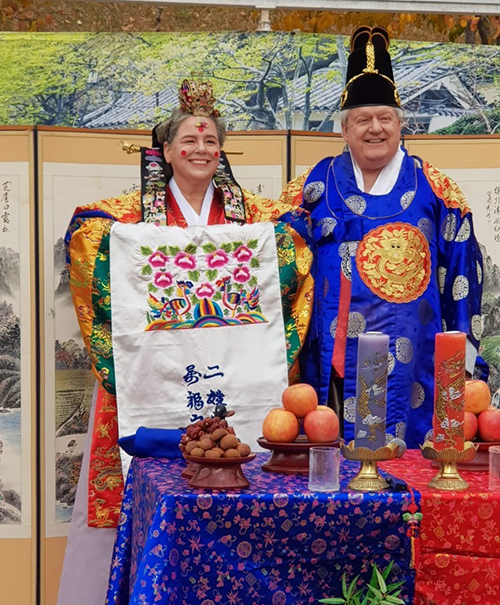 Twenty years later, Maloney became the president of Rotary International. For his year of service, he chose the theme “Rotary Connects the World,” and aimed to increase membership by inviting more young people into the organization and opening its leadership positions to members still actively working.

Since 2020 marks the 75th anniversary of the signing of the United Nations charter, he planned to focus on Rotary’s relationship with the United Nations and their joint commitment to addressing humanitarian issues around the world.

“It would be hard to find anyone who was more prepared to be a Rotary International president than Mark Maloney because of his two decades and more of service,” says Larry Lunsford, the senior vice president and chief financial officer of Bernstein-Rein Advertising in Kansas City, Missouri, who served as Maloney’s volunteer aide during his term.

“He’s a very bright individual with his educational background and his work in the law practice, and that knowledge and thoroughness has served him well in his Rotary journey.”

During the “33-month odyssey” that Maloney served as Rotary International’s president-nominee, president-elect and president, he says he and his wife—a member of the Rotary Club of Decatur Daybreak—led double lives.

They continued practicing law, but they also traveled often. They spent eight days in Japan, visiting Rotary clubs in urban and rural areas. They went to Guatemala, where Rotarians are providing clean water and hygiene training in schools. They also assisted Rotarians from California and South Korea with Operation Smile surgeries in Vietnam.

In February, they left for a monthlong trip that started with a medical mission in Mutare, Zimbabwe. They flew to London to participate in Commonwealth Day activities and intended to go next to Switzerland and Lichtenstein but were told that many countries were closing their borders because of COVID-19. 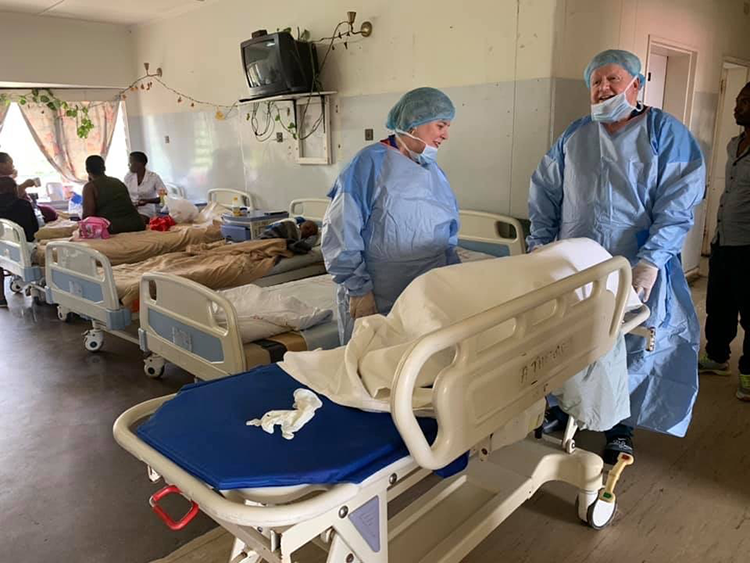 Gay Blackburn Maloney and Mark Daniel Maloney transport a patient from the recovery room to a general hospital ward while participating in a medical mission at Mutare Provincial Hospital in eastern Zimbabwe.

“We changed our tickets to fly back to Chicago,” Maloney says. “The tickets were changed two hours before the president announced the travel ban from Europe. We arrived the next day with no difficulties, but two days later … you may remember the chaos that was at O’Hare.”

They spent four days at Rotary International’s headquarters in Evanston, Illinois, but from then until his term ended June 30, Maloney says his “life was Zoom.” In addition to talking daily with Rotary clubs and staff, he helped organize the first virtual meetings of the organization’s board of directors, which conducted its business in seven languages.

In June, he also hosted Rotary International’s first virtual international convention, which attracted more than 60,000 registrants. Before the pandemic, about 20,000 people were expected to attend the in-person event planned for Honolulu.

“The number of people he was able to impact as president significantly increased because he wasn’t having to physically go somewhere,” says Julia Phelps, a past member of Rotary International’s board of directors from Massachusetts. “He rose to the challenge and really helped our organization see there is another way we can do business.”

Maloney was recently elected to the board of trustees for the Rotary Foundation, which serves as Rotary International’s charitable arm. His four-year term begins on July 1, 2021.

He points out that Rotary also has become important to his family. His daughters have attended numerous conventions and helped with service projects, and his two young grandsons are following in their footsteps.

Maloney is also a longtime member of the ABA Section of Taxation and master of ceremonies of the annual Popcorn Days festival in Ridgway, Illinois.

“As my father-in-law used to say, we have an obligation to pay our civic rent,” he says. “He very much believed that you owe something back to the community for the space you occupy, and he instilled that in us.”