How designer Margaret Hagan drew her way through law school 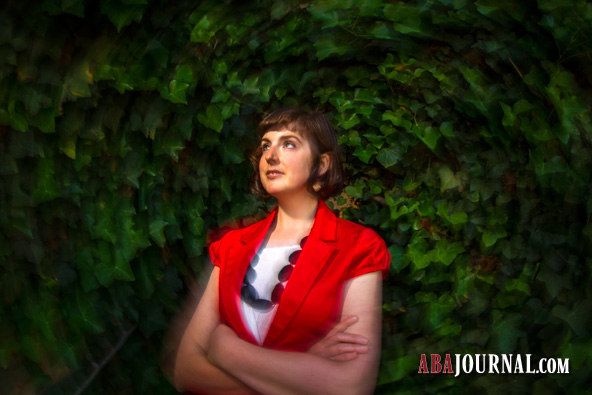 When Margaret Hagan wanted to understand complex subjects at Stanford Law School, she would sketch talking heads with their words inside bubbles or jot down discrete thoughts with bubbles around them and connect them logically and variously with arrows.

“By the time I was in law school, I was sure from Day One that I was going to try to draw my way through it,” says Hagan, who graduated in June and recently began a one-year fellowship teaching and working in an interdisciplinary playpen, Stanford’s Hasso Plattner Institute of Design, known as the D.school.

Hotly trending design thinking has finally reached the text-heavy, no-nonsense bastion of law, tricking it out to make it more comprehensible to one and all.

Visualizing complex facts and ideas began as a soothing approach for Hagan in 2008, when she felt burnt out keyboarding her doctoral thesis (in international politics at Queen’s University in Belfast, Ireland), which brings together years of academic work on human rights issues. Previously, as an undergrad at the University of Chicago, she’d sketched for fun in class while also taking notes, and she did the same while getting her master’s at Central European University in Budapest, Hungary.

Hagan came to law with international human rights work as her goal. But for now she’s caught up in creating visual designs to make the law more easily understandable, accessible and rehumanized.

Studying for a tax final last year, she worked at phrasing questions to better understand the answers, inevitably making it a graphic game-cum-study tool. She did the same with other subject areas and turned them into apps for downloading, some free and some for $1.99.

About 50 of them are downloaded daily from her Law Dojo website, Hagan says, and more when final exams are coming.

Law Dojo thus far is an after-hours hobby: Hagan has her hand in more online efforts than can be cataloged here. She recently created a graphic design for a webpage of divorce mediation resources offered by Richard Granat, a 2009 Legal Rebel and pioneer in low-cost online legal services who works out of his house in Palm Beach Gardens, Fla.

“Her work is unique in the way it helps people understand legal concepts,” Granat says. “A picture really is worth a thousand words.”

The D.school is for Stanford graduate students in the sciences, arts and humanities (including medicine and law) and emphasizes interdisciplinary collaboration on projects. In her first year of law school, Hagan also took a class there.

Working with three teammates from computer science, political science and electrical engineering, she traveled twice to Nairobi, Kenya, to collaborate with nongovernmental organizations and police to help women living in slums. They devised a system with trained escorts for the short trips between home and bus stops, using cellphones to schedule and facilitate.

It failed because ultimately the cops didn’t want to go into the slums, which have bad roads and gangs.

“We could prototype from Palo Alto, but not implement on the ground where it becomes political and local,” says Hagan. She is a big believer in recognizing failure quickly, then moving on from hard lessons learned.

At the D.school Hagan expects to work closely on projects with Ron Dolin, a lawyer and former engineering program manager with Google who is now a research fellow at CodeX: the Stanford Center for Legal Informatics, itself an interdisciplinary lab for computerized approaches to the law with an emphasis on empowering citizens with legal technology.

Hagan brings the work her interest in visualization for enhancing access to justice and consumer law, and Dolin brings his bent for systemization and efficiency in putting the law into computable form.

“We’ll try to reconceive the problems,” Hagan says, “putting his engineering brain and my design brain together.”