Emma Greenwood’s background—working for tech companies and startups—came in handy when she started her own law practice in 2007.

The New York City lawyer found herself helping attorneys who weren’t comfortable with technology familiarize themselves with the many different types of electronically stored information available in a given case. Her ability to demystify the e-discovery process, as well as create and produce tools to help those lawyers comb through mountains of data more effectively, made her invaluable—especially when it came to keeping e-discovery costs down and ensuring an efficient process.

So when the Defender Services Office of the Administrative Office of the U.S. Courts approached her to serve as a coordinating discovery attorney (CDA) in 2011, she thought it was the perfect job. “It sounded like what I was already doing,” Greenwood says. “Only this would be on a much larger scale.”

As one of three CDAs in the entire United States, Greenwood, 39, assists federal public defenders and private lawyers who provide free legal services to indigent defendants under the Criminal Justice Act. 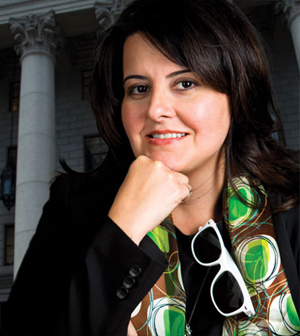 The three CDAs divide the nation: Russell Aoki of Aoki Law in Seattle takes the West Coast; Shazzie Naseem, a partner at Berkowitz Oliver Williams Shaw & Eisenbrandt in Kansas City, Missouri, handles the Midwest; and Greenwood deals with the East (including the busy 1st and 2nd circuits of the U.S. Court of Appeals, based in Boston and New York, respectively).

Greenwood is not only helping lawyers integrate technology into practices on a larger scale but also helping to level the playing field for the defense.

“The fact that there’s an Emma Greenwood in the Southern District of New York has put the defense bar on a much more equal footing to the government in terms of resources,” says Manhattan-based attorney Bennett M. Epstein, who has worked with Greenwood on a handful of cases.

On a multidefendant burglary case, Epstein says, he asked the presiding judge to appoint Greenwood to the case. The judge didn’t know who Greenwood was or what a CDA did, so Epstein educated the court about her and her role. “She deals with well over 100 of us on the CJA panel,” he says. “She speaks the language and knows it backward and forward. You can trust her.”

Greenwood says her services are usually required in cases where there are multiple defendants and public defenders or in highly complex cases involving lots of e-discovery.

“Using the right tools can help attorneys increase productivity, contain costs and improve the quality of representation,” she says. “That helps everyone in the criminal justice system.”

And Greenwood emphasizes that she is not helping lawyers by doing their discovery for them: “My goal is to help attorneys integrate technology into their practice.” Her tasks range from basics like training attorneys how to search PDF files to more advanced concepts like creating custom databases. If necessary, Greenwood will even call in a third-party vendor to help out.

Greenwood worked for tech startups before enrolling at New York Law School in 2003. Planning on a career in magazine writing, she landed a job writing content for Citysearch, the online city guide that was a small Internet startup at the time.

“It was a writing job, but it involved using HTML code,” Greenwood says. “I really enjoyed it. I liked being forced to use my brainpower to adapt my writing style for a website as opposed to a magazine.”

A couple of years later she found her way to Harlem, helping a nonprofit integrate technology into its business plans. She made up her mind to go to law school so she could find ways to use technology to improve the practice of law and “wake something up that’s been around for a long time.”

While being a CDA takes up most of her time, Greenwood is equally passionate about using technology to improve the world outside of her law office. She founded Whooshers.com, a website and forum for people suffering from pulsatile tinnitus, a rare condition she has that causes a whooshing sound in her ears that pulsates in time with her heartbeat.

Greenwood says site visitors trade stories and advice, and in some cases, people even discover that they have a life-threatening underlying cause and are able to get the treatment they need.

“I don’t make any money through the site, but it’s rewarding beyond words,” says Greenwood, who is working on establishing a 501(c)(3) nonprofit organization dedicated to raising awareness of the condition. “The site was set up rather spontaneously and I never imagined it would grow like it has. It takes up most of my free time. It’s actually like another full-time gig.”

Updated on Sept. 19 to clarify that the CDA acronym stands for “coordinating discovery attorney.”