Digital assistants that can handle legal inquiries like a super-Siri, answering your spoken question with a response with case law links, would never make money, many people told computer scientist Jimoh Ovbiagele—mainly because attorney incomes depend on being paid for legal research.

Then the Toronto Globe and Mail wrote a 2014 article about Ovbiagele’s project, which he and other University of Toronto students made using IBM’s Watson cognitive computing system. And after that story ran, NextLaw Labs, an independent subsidiary of the legal giant Dentons, became an investor in what is now known as Ross Intelligence.

When Ross Intelligence—described on its website as “an AI lawyer that helps human lawyers research faster and focus on advising clients”—got funding, Ovbiagele left college and moved to California, and the company is now headquartered in San Francisco. (The name Ross is styled in company materials with all-capital letters, though it’s not an acronym.) In May, Baker & Hostetler announced it would be licensing Ross Intelligence to use in its bankruptcy practice. Other law firm subscribers include Latham & Watkins and Wisconsin’s von Briesen & Roper.

“We believe that emerging technologies like cognitive computing and other forms of machine learning can help enhance the services we deliver to our clients,” Bob Craig, Baker & Hostetler’s chief information officer, told the ABA Journal. 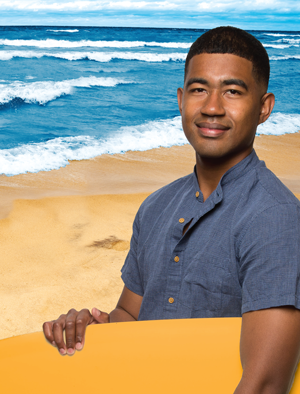 Friends says Ovbiagele, 23, is a genuine and curious listener. That may be why he saw room for Ross in the law firm market when others did not. To him. the problem seemed apparent: Clients need legal research, but they increasingly can’t—or won’t—pay for it like they once did.

And he’s seen firsthand the problems individuals have paying for legal services. When Ovbiagele was 10 years old, his mother, a nurse from the Philippines, wanted to divorce his father, a Nigerian immigrant. But she couldn’t afford the legal fees, and the two are still married, although they lead separate lives.

Ovbiagele doesn’t see people using Ross as a way to get legal help without hiring a lawyer, but he does think it will allow legal services to be delivered at a more affordable price.

“Justice isn’t accessible for everyday people,” he says. “Although there are fewer positions for lawyers today, 80 percent of the people who need legal representation can’t afford it. Technology will be an opportunity for small bands of lawyers to address this.”

Though he wouldn’t say what a subscription to Ross Intelligence costs, Ovbiagele did say the service is cheaper than Westlaw or LexisNexis. Initially, Ross’ legal database came from publicly available sources, but the business now gets information from a legal publisher, which Ovbiagele would not name.

And he acknowledges Ross can’t advise clients on what they should do, a very significant part of legal advice.

“We give lawyers the information; it’s their job to make the judgment call, which requires a lot of things computers can’t do,” Ovbiagele says. “A lot of people talk about Ross replacing jobs. Really, it just makes the jobs easier.”

Ovbiagele grew up in Houston and started programming as a child. Before Ross, he and a friend designed a productivity app they called Big Mother: Users set the app to publish embarrassing information about themselves on social media if tasks weren’t completed by specified deadlines. (Some mothers are like that.) He also came up with a college dating app integrated with Facebook, where participants could put heart symbols by classmates’ profiles and the service connected people with corresponding hearts. He also worked on technology projects, including platforms for self-driving cars and wearable technology.

“He’s pretty visionary when it comes to having his finger on the pulse of technology now and where it’s going in the future,” says Andrew Arruda, an attorney and another Ross co-founder who is the company’s chief executive officer.

Many young people talk about how they’ll one day develop something huge, get investor funds and move to Silicon Valley. That fantasy rarely becomes reality, but those who know Ovbiagele, a basketball enthusiast who also likes to ride an electric longboard, aren’t surprised.

“I think the difference between him and other people who say that is that for him, it wasn’t just for the money; it was pretty genuine,” says Christian Mederios, the college friend who worked on the Big Mother app. “There’s a very calm, driven force behind him, and that’s something that’s always kept him driving toward his goals.”