A few years ago, J.J. Prescott went to court to deal with a traffic ticket. The University of Michigan Law School professor waited four hours to have a very short informal hearing.

“Imagine if I lived in a rural area where the courthouse was two hours away,” he says. “And as a result, I had to miss an entire day of work to go to court, which, if I were paid by the hour, would equate to $100 or more in lost wages. All of that aggravation, all to come over to have that conversation.

“I can’t believe that in 50 years, that’s how our courts will operate.”

They might not, and Prescott’s work could be a reason why. The U-M Online Court Project, which began with his collaboration with former student Ben Gubernick, created an online platform allowing citizens to resolve smaller legal matters—civil infractions, plus minor warrants and misdemeanors—without having to go to court. Users submit their side of the story and other information, answer questions and eventually hear from a decision-maker.

Prescott says at least half of court cases are minor matters that could be resolved simply: “It can happen the way you request an increase in the credit limit on your credit card—at 11 p.m. from your couch.” 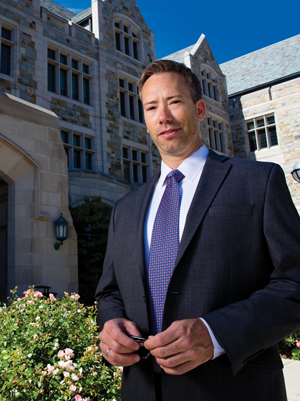 Online interactions have a lot of advantages over the traditional model, Prescott says. They remove barriers caused by poverty, disability and personal obligations; reduce time spent on cases; avoid the intimidation and fear some people feel in courthouses; and sidestep the possibility that the defendant’s appearance could create perceived or actual bias.

The project was in the beginning stages when Prescott got the ticket. With a grant from the University of Michigan, he had a prototype made and convinced the Michigan state court administrative office to give the project access to court data.

Through the university’s Office of Technology Transfer, which helps academics build businesses out of their ideas, Prescott launched a startup, Court Innovations Inc., to market the technology and give it a permanent home. He now has the software, Matterhorn, in 15 Michigan district courts and is in talks with other states.

Having the state’s blessing was critical, Prescott says—not only for the data but also for credibility when trying to start a pilot project in local courts. The 14A district court, serving much of Washtenaw County, was the first to adopt the technology.

The county’s court administrator, Bob Ciolek, says it’s a massive advantage to everyone—citizens, law enforcement officers and the magistrate who handles traffic cases. Court Innovations says district 14A has cut its average case closure rate from 30 to 60 days to 7.67 days using the software. This has dramatically reduced staff time spent on cases, sped up revenue collection and reduced the number of appeals.

“That is [fewer] dockets that the magistrate has to hear,” Ciolek says, “which is good, because it frees her up to do other things.”

Court Innovations is collecting data on public response, but early feedback is good. The company heard from one user who appreciated the platform because she works 12-hour days whenever the court is open.

Court Innovations CEO M.J. Cartwright was brought on early to lend some business expertise. She appreciates Prescott’s willingness to let her take the lead in those areas.

Prescott, 42, brings backgrounds in both law and economics to the table; he has a PhD in economics from the Massachusetts Institute of Technology. He received that after clerking for possibly the most famous appellate jurist of 2016—Chief Judge Merrick Garland of the U.S. Court of Appeals for the District of Columbia Circuit.

“I know so many of his supporters say similar things, but I have never met somebody who is more hardworking, disciplined, careful and fair,” says Prescott. “I spent a year in his chambers and I’m much better for it.”