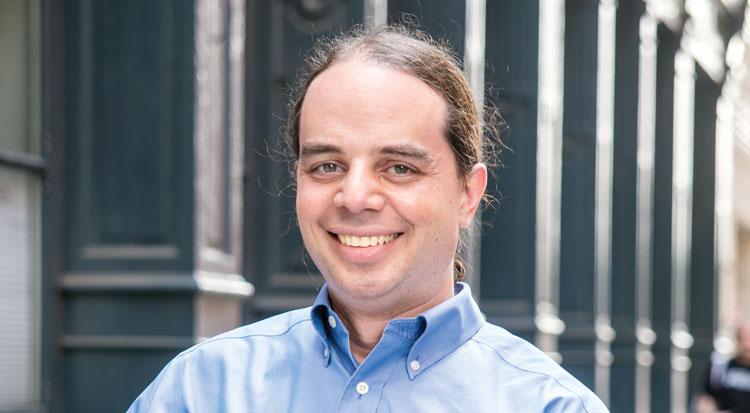 At age 7, Jonathan Pyle taught himself to write computer programs by reading a book about BASIC for kids.

“One of the first programs I typed in was a program that asked ‘What is your name?’ and then when you typed in your name it would say, ‘Hello, Jonathan.’ I thought that was supercool,” Pyle says.

He’s been coding ever since. In 2015, he built Docassemble, a free, open-source platform for expert systems and document assembly. People use it to assemble filings for a variety of legal issues, including divorce, eviction and Chapter 7 bankruptcy.

“It is kind of funny that, years later, I wrote an open-source software package with 60,000 lines of code that is a platform for basically doing that exact same thing,” says Pyle, who graduated from the University of Pennsylvania Law School in 2002.

He’s also developed a web-based software system platform that manages documents and facts in complex litigation, and something he calls “The Fetcher,” which automates factual research in housing cases by scraping various websites.

A former law firm associate who did class-action defense work, Pyle, 42, came to Philadelphia Legal Assistance in 2008 as a consultant evaluating a foreclosure hotline. In 2010, he became the agency’s contract performance officer. “Compliance was sucking up hours of my time every year,” says Anita Santos-Singh, the organization’s executive director. “[Pyle] was able to automate it, and now it’s a very small piece of his job. He spends the bulk of his time looking at contracts and working on technology tools that support our work.”

Inspiration for Docassemble came when Pyle was using HotDocs to interview family law clients and felt that more could be done than what the automated software offered.

He started a Slack group for Docassemble, which has over 300 members, and last year, users had their inaugural conference, called Docacon, at the ABA’s Chicago headquarters. They met at Brooklyn Law School this year.

Among those using Docassemble are Upsolve, a free service that assembles Chapter 7 bankruptcy forms, started by fellow 2019 Legal Rebels Rohan Pavuluri and Jonathan Petts. Documate also uses Docassemble, as does Boston’s Volunteer Lawyers Project, which uses it for appeals on Social Security income over payment appeals. Use is not limited to nonprofits or legal work. Pyle knows of a Washington, D.C., lawyer in private practice who uses it, as well as someone in France who uses it to diagnose medical equipment problems.

“It’s as easy to use as Facebook; you’re checking boxes and choosing from menus,” says Steenhuis, who estimates that since they launched MADE in November 2018, it has helped over 700 tenants prepare answers and requests for discovery in eviction cases. The filings give tenants a two-week delay of the case, he adds, and get them in front of a judge so they can try and negotiate a better outcome.