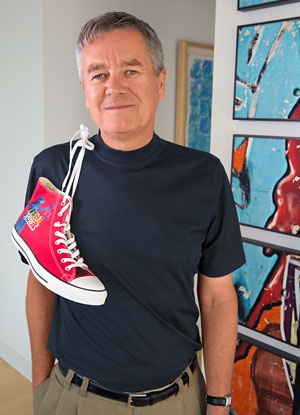 Transactional lawyers compare their work with previous documents to look for similarities and to ensure their writing stands up to legal challenges. But Kingsley Martin’s approach is to find differences in the documents and make sure nothing is missing.

A former tax lawyer who now designs legal software, Martin’s latest venture is a statistical analysis engine he calls Kiiac, (knowledge, information, innovation and consulting). The software identifies standard and divergent terms in contracts, and its benchmarking tools show lawyers how their current document compares to the standard.

Instead of reviewing a handful of contracts, which is what lawyers usually do when preparing a new one, Kiiac analyzes and sorts information from 100 contracts per minute. The software shows lawyers additional and duplicated terms, and determines what common or uncommon text is in the lawyer’s current document.

Fans say it gives attorneys more time to work on negotiating better deals. “It’s moving lawyers up the value chain, and it’s long overdue,” says Toby Brown, who writes at 3 Geeks and a Law Blog. Brown, the former director of pricing at Fulbright & Jaworski, watched Martin demonstrate Kiiac at a partner retreat. About 50 Fulbright executive agreements were used as examples.

Now director of strategic pricing and analytics at Akin Gump Strauss Hauer & Feld in Houston, Brown notes that Fulbright partners often talk about “the Fulbright way” when describing how the firm does business. Through Kiiac, Martin demonstrated there really was no standard Fulbright way in terms of the firm’s executive employment agreements. “He showed them the clauses were highly variable,” Brown says, “which meant that the employment clause was negotiated in every contract.”

Still, Martin allows that some have reservations about his software.

Approximately 15 clients use Kiiac. Each template costs between $3,000 and $5,000. At some point Martin would like to offer something less costly, mostly for small law firms and sole practitioners.

“There’s been little or no incentive for the marketplace to do something like this because they’re paid by the hour. But of course that is changing,” says Martin, who also owns Contract Standards, a free, interactive website that shares contract analysis, checklists and clause libraries.

Earlier this year, the Association of Corporate Counsel announced a Kiiac-driven offering, the ACC Contract Advisor, which creates templates based on sample agreements provided by ACC members. It can be used for both research and document production, and can also review and benchmark a member’s document to the ACC template.

The son of a Royal Air Force fighter pilot, Martin, 53, grew up in England, Scotland and Singapore. He has a law degree from Oxford University and began his legal career in London before moving to the United States. Martin graduated from Harvard Law School in 1985 and now lives in Chicago.

A few years later, while working at a Santa Fe, N.M., law firm that had no support staff, he taught himself computer programming and came up with a document assembly application. Martin also developed what he calls a rudimentary client-relationship-management application that kept track of clients’ estate plans.

Martin officially switched to the IT side in 1991, first as director of legal technology development at Dorsey & Whitney. He later worked at Jones Day and Kirkland & Ellis, and also spent almost seven years developing products, including West km, for the Thomson Corp. Martin founded Kiiac in 2008.

When asked whether he prefers exchanging ideas with lawyers or technologists, “everyone” is his answer. “I don’t think of the word criticism as a negative word,” Martin says. “I think of it as the most helpful thing a person can have.”