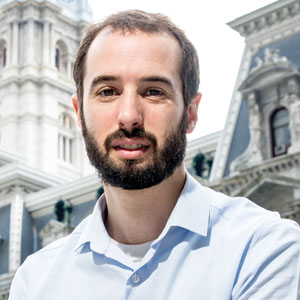 Many might see life as a software developer in San Francisco as a job with a future (if not a fortune). But it wasn’t enough for Michael Hollander.

“I enjoyed the work that I did, but I was solving problems to help businesses do business better,” says Hollander. “I wanted to do more to help my community.”

Today, Hollander, 36, is a staff attorney at Community Legal Services of Philadelphia. For his day job, he provides employment law services to indigent clients. And he is using his developer skills to modernize pro bono legal services for low-income Philadelphians.

“I tend to be extraordinarily practical with the tools I’m making,” he says, noting that when he experiences “pain or boredom by the repetition of this work,” he starts looking for new ways to do the task..

Repetition-induced boredom was Hollander’s motivation for building a digital expungement generator. Both his office and Philadelphia Lawyers for Social Equity—a legal service provider Hollander helped co-found—use the generator to convert an electronic version of a client’s criminal record to an editable and near-file-ready document.

“The generator cuts our petition drafting time by two-thirds, from three hours to one,” says Mike Lee, the PLSE’s director. The generator has helped his office file nearly 4,000 expungements—92 percent of which have been granted.

The First Judicial District in Philadelphia has felt the effect of the app. Keith Smith, director of active criminal records for the criminal trial division at the court, says he’s seen expungement filings increase significantly. In 2010, the year before the app was first used, the court saw 4,430 expungements filed. The year after the app’s release, 2012, saw expungement filings jump to 8,125; in 2013, there were 6,003.

While the expungement generator has created interest amongst other legal service providers in Pennsylvania and around the country, it is not Hollander’s only legal tech project. He also created a data-collection tool that helped forgive bail judgment debt for thousands of Philadelphians.

In 2010, the First Judicial District needed to plug holes in a budget ravaged by the recession. A part of this effort included an attempt to collect $1 billion in allegedly unpaid bail judgment debt. Hollander heard from his clients that this debt was up to 30 years old, and that many had gone to court on their own recognizance after missing their initial date, which legally required a reduction in the debt they owed.

Hollander wanted to better understand these anecdotal stories, but the court would not release the debt data. Undeterred, he made a tool that collected and organized the public data for nearly every bail judgment at issue.

He was able to take this data and show that 88 percent of the debt pre-dated the year 2000. Further, the data showed that the court’s attempt to collect this debt was playing fast and loose with its own rules.

Hollander, the legal services office and their partners successfully won debt forgiveness for everyone the court initially sought to collect from in 2010.

Hollander says his ability to create new tools comes from working at an office and with colleagues who support him.

Sharon Dietrich, the litigation director at Community Legal Services and Hollander’s boss, is happy to provide him the space he needs to explore new ideas.

“We need to do more with less, and technology can be a part of the answer to that,” Dietrich says. “We can reach many more people with the same number of attorneys.”

Hollander and his wife, Beth, an architect, both work in demanding professions, but he proactively seeks a healthy balance, especially since becoming a father. This has meant forgoing evening work events to have more time to spend with his 2-year-old daughter, Esme.

Hollander’s use of technology and the impact of his work have broader implications to the legal profession. And he is optimistic, while acknowledging that technology will change what it means to practice law.

“Lawyers are smart and enterprising,” he says. “They will certainly find a way to land on their feet.”