Mississippi ranks last when it comes to access to justice; Tiffany Graves hopes to change that 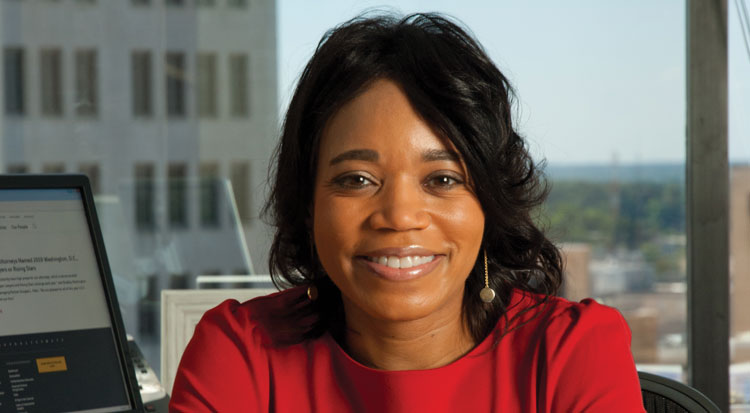 Growing up in a working-class household and with a large extended family in Virginia’s Shenandoah Valley, Tiffany Graves knows what it looks like when a lawyer’s services are out of reach.

They were living paycheck to paycheck and could have benefited from legal representation in housing or custody disputes, but they couldn’t afford it.

“I really do see a lot of my work as very personal,” says Graves, 44, who graduated from the University of Virginia School of Law in 2006 and is pro bono counsel at Bradley Arant Boult Cummings in Jackson, Mississippi.

While Graves expected to stay in the South after graduating from the University of Virginia School of Law in 2006, Mississippi had not been on her radar. But as her relationship with classmate James Graves, who was from Jackson, grew more serious, she sought out and was awarded a competitive fellowship to work at the Mississippi Center for Justice. She and James are now married.

In Mississippi, 695,000 residents—of 3 million—live in poverty. Statewide, there are fewer than 7,000 attorneys. In 2016, the National Center for Access to Justice ranked the state dead last on its use of civil justice best practices. These numbers make a career in access to justice a challenge, says state Chancery Judge Jacqueline Mask.

Undeterred, Graves went on to run the Mississippi Volunteer Lawyers Project, where she launched the state’s first online legal help portal, and the University of Mississippi School of Law’s Pro Bono Initiative, where she helped enact a state supreme court rule allowing law students the limited ability to practice in pro bono clinics.

Then in 2014, Graves became executive director of the state supreme court’s Mississippi Access to Justice Commission. (Disclosure: The author provided pro bono technology support to the commission for an unrelated project while Graves was its director.)

While there, she engaged the faith and medical communities to empower a more holistic set of stakeholders engaging justice issues and released the state’s first self-help forms. She also worked with Judge Mask, a co-chair of the commission, to develop a pro bono clinic in the judge’s district.

Starting in one county, Graves created a toolkit that made it easy to open similar clinics districtwide and across the state.

While there are leaders across the country who use the index to drive reform at home, “Tiffany was one of the best and strongest leaders” who leveraged the rankings, says David Udell, executive director of the National Center for Access to Justice at Fordham University School of Law, which produces the index.

At Bradley, the firm essentially created the pro bono counsel position for Graves, says Dylan Black, a partner and chair of the firm’s pro bono committee.

In this role, Graves has more than 500 lawyers in 10 offices across six states and Washington, D.C., that can help tackle the justice gap. In her first year, the firm reported that total pro bono hours completed increased 39% and the number of attorneys completing more than 20 pro bono hours a year rose 69%.

This article first appeared in the September-October issue of the ABA Journal under the headline “Close to Home.”