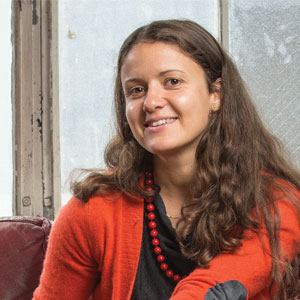 As a Brooklyn criminal defense lawyer, she was representing a prisoner who had been denied parole nine times and was up for a 10th successful hearing. Representing Thornwell Richburg taught her that New York parole decisions were often based on “the nature of the crime,” not anything the prisoner had done in the decades since. Partially as a result, she says, more than 10,000 state prisoners are denied parole every year at a huge human and financial cost.

“It’s just so ridiculous that you have somebody who is 50-plus years old and [parole boards are] still looking at something he did when he was in his early 20s,” she says. “It’s not recognized that somebody grows over time.”

The case also taught Zeichner, 36, where to find publicly available parole data from the state of New York. That soon became relevant to her other endeavor, as an integrated digital media graduate student at New York University’s engineering school.

Wanting to convert the data into a more usable format, she asked her adviser, R. Luke Dubois, whether it was possible to collect it from the Web. Before her eyes, he wrote a simple computer program to automate the collection.

That was the beginning of Zeichner’s Parole Hearing Data Project, a repository of public New York parole data available in easily used formats and presented online. In addition to more than 30,000 records, the project presents prisoners’ stories and parole-related legislation.

It’s integrated into an earlier project of Zeichner’s, the Museum of the American Prison, which she says is an attempt to tell stories about incarceration that don’t fit into the context of a court case.

Zeichner sees the Parole Hearing Data Project as educational, particularly because mass incarceration is getting reconsideration in the U.S.

“I think it’s easier for people to think more about the front end, like practices that put people in prison,” she says. “Is [parole denial] another factor that leads to the vastness of our incarcerated population? So partly it’s education—to give airtime to, I think, a less-recognized issue.”

Issa Kohler-Hausmann, an associate professor of law and sociology at Yale University, has been considering using Zeichner’s parole data as part of another parole-denial case. For that client and for a wider potential challenge, she’d like to know how the parole board handles similar cases, but, she says, the state corrections department is “somewhere between intransigent and obstructionist.”

“That’s why something like this is so amazingly useful,” Kohler-Hausmann says, “because she’s using the data that they do post and compiling it for us.”

This year Zeichner is turning her legal background and data-wrangling skills to another task: a fellowship with the nonprofit Code for America, which builds technology to make local government services easier to use.

As part of a three-person team, she’s working on tools to improve relations between the community and the police in Vallejo, California, which is struggling with the legacy of a 2008 municipal bankruptcy, a series of fatal police shootings in 2012 and a troubling crime rate.

The fellowship has taken Zeichner, a New Yorker since 1997, across the country to the San Francisco Bay area. While she loves and misses New York, she says it’s exciting to live somewhere new.

While Zeichner still practices law as a solo, her career has taken her far from the conventional path of a law school graduate. Inspired by an early job with a creative consumer attorney and then again at the public interest-focused City University of New York School of Law, she says she was always interested in people and problem-solving.

“I guess I always had an idea that I wanted to be creative,” she says, “however I ended up using the law.”