The license plates on Jerry Goldman’s Subaru Legacy read “OYEZ” in honor of his U.S. Supreme Court-focused multimedia archive, Oyez. And the ringtone on the retired political science professor’s iPhone is the voice of a marshal saying the word three times, which starts the traditional call announcing the justices’ arrival.

Now, at age 71, Goldman—named a Legal Rebels Trailblazer by the ABA Journal—says he has some more “ephemera” that he hopes will get on the site, which is moving from Chicago-Kent College of Law to Cornell University’s Legal Information Institute. It will continue to get support from Justia, the online legal publisher.

“This means passing along my knowledge gained over 25 years, plus offering complete details regarding my workflow,” says Goldman, who has a PhD from Johns Hopkins University and believes his political science education was instrumental in understanding judicial behavior.

As the project’s website describes it, Oyez “is a complete and authoritative source for all of the court’s audio since the installation of a recording system in October 1955. Oyez exclusively offers transcript-synchronized and searchable audio, plain-English case summaries, illustrated decision information and opinions. Oyez also provides detailed information on every justice throughout history and offers a panoramic tour of the Supreme Court building, including the chambers of several justices.”

Among Goldman’s observations is that the idea the legal profession is resistant to technology is particularly prevalent among the judiciary.

“Given that most judges face retention or election, their interest in transparency is largely theoretical. Efforts to increase public understanding face serious judicial opposition in my experience,” Goldman says. “The federal judiciary is a different story given lifetime appointments. With few exceptions, judges have no interest in the idea of transparency and improved understanding for the public at large.”

Goldman, a baseball fan, got the idea for Oyez at a Chicago Cubs game. Its earliest version, influenced by baseball cards and built with HyperCard stacks, was called “The Hitchhiker’s Guide to the U.S. Supreme Court.” Grants from the National Science Foundation and the National Endowment for the Humanities led to what it is now, as well as material contributions from Mayer Brown, Jenner & Block, Sidley Austin, Jones Day and Justia.

Then a professor at Northwestern University, where he taught for 36 years, the funding success generated academic envy, according to Goldman. And some found his “ideas and outspokenness disruptive,” he says. Goldman and the site moved to Chicago-Kent in 2011 with the help of Ronald Staudt, a law professor there and a 2009 Legal Rebel.

“I thought a new environment would give me the chance for recognition and the time to finish my opus,” says Goldman. 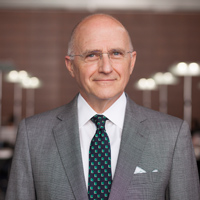 Jerry Goldman is a research professor at Chicago-Kent College of Law. He has been working on Oyez—his magnum opus—for 25 years. For most of that time, he was a professor of political science at Northwestern University. Goldman lives in Evanston, Illinois, with his wife and their two dogs, flat-coated retrievers named Luna and Booker.