For Fastcase founders, the message is: Change, and do it faster! (podcast)

Legal technology has changed since 1999, when Ed Walters and Phil Rosenthal founded the legal research service Fastcase—but not as much as they’d like.

“People are still chasing around silly ideas on the internet. PACER today looks exactly the way it did back then. There was a major problem in locking down public law in 1999, and that still is true today,” says Walters, Fastcase’s co-founder and chief executive officer. “We’re very gratified by all the work that’s been done. But man, there’s so much more work to do.”

Their list includes making public laws more accessible. Fastcase is involved in a lawsuit with Casemaker, another legal research company that has a deal to serve as the exclusive publisher of the Georgia Administrative Rules and Regulations. Fastcase sued Casemaker in 2016 after it received a takedown notice regarding the documents.

“Instead of waiting to be sued or caving to their demand, we said we would sue and ask the judge to say what everyone knows: Public law is public law. This is our principle we want to establish for ourselves and everyone else,” says Walters, who—along with Rosenthal—was a Covington & Burling associate when they started Fastcase. Rosenthal’s work focused on patent, nuclear and telecommunications law, and Walters did corporate advisory work and intellectual property litigation.

And now they are both Legal Rebels Trailblazers.

Although they were BigLaw associates who represented publicly traded companies, the legal research service fees seemed too high to both men—and to their clients. Also, the pass-through structure made firms insensitive to value for legal research, Walters says, and most legal research sites were not user-friendly.

“There was this horrible access-to-justice problem where lawyers and the public could not even get access to the laws. And we realized that doing the research was just too hard,” says Rosenthal, who also has a doctorate in physics from the California Institute of Technology. “The technology that folks used elsewhere wasn’t available in legal services during that time.”

Because Fastcase prioritizes algorithmic analysis instead of editorial, Walters says, its pricing costs less than traditional research services. He says the company has more than 800,000 subscribers.

“They’ve played a huge role in our success,” Rosenthal says. 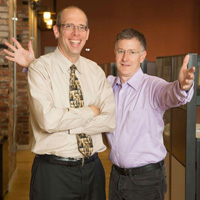 Phil Rosenthal and Ed Walters are the founders of the legal research service Fastcase. They were associates with Covington & Burling when they started the company in 1999.